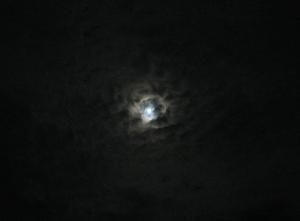 As the swamps began to freeze, settlers looking to stay warm during the winter would set traps along them, to try to catch the full, soft, fluffy beaver, who were looking to prepare their winters' naps; this is why the Full Moon of November is called the Beaver Moon. Also, because the weather tends to take a turn toward the chilly, and ice begins to form on our windows, this Moon is also referred to as the Full Frosty Moon.

With the shortening of daylight - and for us the ending of Daylight Saving Time, causing the daylight to end very early in the afternoon - many myths came of how to keep the towns lit. One such involves the wise elders of Chelm, who, in order to brighten their town, but not pay any money for it, came up with the brilliant idea of capturing the Full Moon by filling a barrel with water, wait for the Moon to shine in the barrel, then hurriedly place a lid on top. When, several days later the sky by itself wasn't enough to light up the streets, the wise men had the barrel rolled into the center of town, and took off the lid. To their surprise, they didn't see the Moon. Thinking it had sunk to the bottom, they slowly poured out the water, but the Moon just wasn't there. The wise men were aghast. Someone had stolen their Moon. They just had to try again, and be more careful guarding it.

We probably won't have to worry about losing our full moonlight this month, even though our Full Moon Wednesday, November 28th, will be accompanied by an eclipse of the Moon; however, it's just a penumbral eclipse. The Earth's penumbra is much lighter than its main shadow, the umbra, so the Moon will show very little in the line of darkening; also, it's occurring on the other side of the Earth.