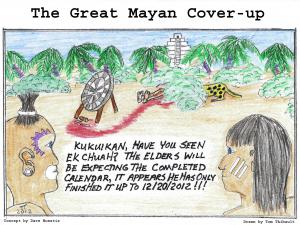 It's difficult to know exactly when the alleged Mayan doomsday prophecy drivel started. I've had an interest in the Mesoamerican cultures of Central America for many decades, so I was aware of their advanced calendar system. However, in all my studies of these cultures I never encountered any reference to a Mayan prophecy regarding the end of the world on December 21, 2012. Misinterpretation, lack of knowledge of Mayan calendar reckoning, and downright falsehoods have conspired to feed the doomsday scenario. I swore to myself that I would not dignify any of the balderdash in my columns.

Well, with only a short time remaining before the supposed end time, I decided to put in my two cents worth. While it won’t silence or appease those pessimistic folks out there, perhaps it will provide some rational information for anyone who wishes to understand why you and I will be around to experience December 21 and the future.

Based upon the fundamental research I have conducted about this now vast topic, it appears the current fascination with the supposed end of the Mayan calendar began perhaps three decades or more ago. The mechanics of the Mayan calendar system is well established. I will not go into all the details because that information is readily available on the Web. It’s the misinterpretation of those facts that is quite alarming.

What happens in our Gregorian calendar system? For instance, when we get to December 31, 2012, does that signal the end of the world? No. We continue the January through December reckoning into the next year by adding one to the year. So the next day is January 1, 2013. Similarly, we group years into decades, centuries and millennia. The Maya did likewise. They rolled days up into other units, like we do with weeks, months, years, etc.

So why would someone believe that some cataclysmic, mystic, or spiritualistic (good or bad) event was going to occur simply because the Mayan Long Count ran through its logical completion of baktun 13? Like our calendar system, once baktun 13 ends on December 20, 2012, baktun 14 begins. There is no mystery about it.

Unfortunately there are those who somehow want to benefit from a misinterpretation of the end of baktun 13. And contrary to popular belief, there is no mention in any Mayan writings about the end times coming upon the completion of baktun 13.

However, that doesn't stop individuals and groups from prophesizing the many varied ways in which the Earth and humankind will change on December 21.

More than likely you have read or heard about the many astronomical events that might destroy our civilization. I’m not sure I can recount all of them, but here’s a short list: (1) high solar activity will produce huge solar storms that will cause major problems, (2) magnetic pole reversal of the Earth’s magnetic field, (3) a rogue planet will collide with the Earth, (4) a comet or asteroid will collide with the Earth, (5) the black hole at the center of the Milky Way will somehow create extreme gravitational forces affecting the Earth, (6) the Sun will eclipse the galactic center in some cosmic grand alignment causing problems and 7) planets in our solar system will be in some grand alignment.

There is absolutely no scientific evidence for any of these dire scenarios.

In addition, there are mystic and spiritual ideas that have pointed to December 21 as the date for a transformation of the human race. Some of these events are depicted as benefiting humankind in a New Age, while many are more apocalyptic. These assertions are mere speculation predicated on the incorrect assumption that the Maya prophesized “the end of the world as we know it” (apologies to REM).

In conclusion, I leave you with these thoughts. If I truly believed the world would end on December 21, I would have stopped doing everything that defines and completes my life. I would sell my house and possessions, drain my bank account, and spend my last days traveling the world and experiencing every facet of life. I would stop teaching my astronomy labs because what difference would it make? Also, if most of my students also believed the end time was near, why would they even bother attending classes of any subject? They put in a lot of hard work in order to graduate with a degree. Why bother if that education won’t be needed after December 20?

If a vast majority of people believed in the doomsday scenario, then millions of still employed people would not show up for work. I don’t see that happening in the world around me. And think about all the recent political races and the staggering amounts of money candidates spent on obtaining office. Again, if the idea that the world would soon end was widespread, why waste all that time and effort to win an election if you and everyone else won't be around to see it come to fruition. It seems absurd to me in the extreme that we would carry on “business as usual” in the face of imminent destruction.

If indeed most people believed the world was coming to an end, chaos would assuredly ensue. The crime rate would escalate because what could law enforcement and the court system do to you? Since there would be no real consequences, society would come apart at the seams. If that scenario did occur, then we’d deserve whatever apocalyptic fate unfolded.

While some folks may be stockpiling food and supplies in preparation for Doomsday 2012, I haven’t heard of thousands of families constructing survival shelters like folks did in the late 50s and early 60s under the threat of the real doomsday scenario of nuclear annihilation. (Though I recently read that bunker sales had risen.)

I'm sure you could come up with quite a few more scenarios of daily activities that would be fruitless and meaningless if we knew we would succumb shortly. Will some people panic? Possibly. However, I don’t believe the entire world is that naive or gullible to buy into “the end is near” tripe.

Today a wealth of accurate and responsibly disseminated information is available for those who care to seek it. Just because it appears on the Internet does not automatically bestow validity or accountability.

In conclusion, don’t yield to the wild claims of the demise of our world and our entire civilization. We can honor the Mayan civilization by wishing everyone a Happy Baktun 14. On December 21 it will be business as usual. As the television promos say, “Film at 11!”

I look forward to providing you with articles exploring the beauty of the heavens for years to come.