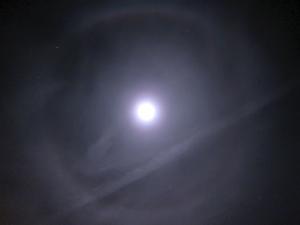 With the winter season beginning this month, the nights are the longest, and the days slowly begin to get colder.  As such, we celebrate both the Full Cold Moon and the Full Long Night Moon.  And, because we also celebrate the holiday season at this time of year, this can also be called the Moon Before Yule, although this year it takes place afterwards, on December 28th.

As the end of December brings with it much feasting, we have to believe that the Moon has been responsible for many of our delicious festive edibles.  Mooncakes, round rolls filled with spicy bean paste, were invented by the Chinese; the French croissants are buttery, flaky representatives of the crescent phase, and sandwich cookies, called cherry half moons by the Swedish, are perfect quarter-phased shapes.

But: We have a problem with the constancy of a Moon year.  As the Moon revolves around the Earth, it does so in 29 1/2 days.  29 1/2 X 12 months only give us 354 days.  We have a week and a half extra to content with.  Each approximately three years, the Moon has to catch up with the solar year by having a thirteenth Full Moon, traditionally referred to as a Blue Moon.  Surprisingly, this name comes from the Moon supposedly looking bluish, which is not a common sight, although it is believed that after the 1883 eruption of Krakatoa, the material in the atmosphere did create a blue-tinged Moon for several months.

According to the Farmers' Almanac, which was considered the be-all and end-all reference for farmers, a Blue Moon was defined as the third Full Moon in a quarter of the year, which would now have four.  It is also said that this extra Moon gave meaning to the unlucky property of the number 13, as the early calendar keepers found this additional Moon a calculation nuisance.  But, because these extra Full Moons are actually rather common, occurring 7 times in 19 years, the saying, "Once in a Blue Moon" in defining a rarity, is really no more rare than many of our other cycles here on Earth.