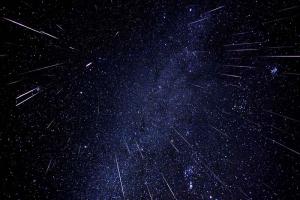 Mild comfortable nights of observing are now behind us. As we approach the Winter Solstice on December 21 at 6:12 a.m. (the earliest date and time for this astronomical event since 1896), our days grow shorter while the nights grow longer. Amateur astronomers like the early sunsets and the longer nighttime skies, but the cold temperatures can shorten one’s observing session quite effectively.

However, unless we get slammed with frequent and fast moving weather fronts during meteorological winter (December thru February), the skies can be very clear and transparent. For those of you who own telescopes of any size should take that opportunity to focus your instruments on the planet Jupiter. On December 1, this Jovian world will be at its closest distance to the Earth. Though still just over 378,000,000 miles away, Jupiter and his four Galilean moons reveal a lot of detail to even a casual observer using a telescope.

On that date this fifth planet from the Sun can be found to the left of the Hyades asterism in Taurus, and almost five degrees from Aldebaran, the red star that marks the eye of the bull.

While Jupiter will be observable for the next several months, the upcoming Geminid meteor shower will peak on the night of December 13-14 (Thursday night to Friday morning). The Geminids are currently the best meteor shower of the year for northern hemisphere viewers, and the New Moon will not be present to brighten the sky.

Therefore, from a dark sky location an observer should potentially observe 60+ meteors per hour at peak, which is predicted to occur sometime between midnight and 4:00 a.m. EST. But for those of you who don’t wish to observe into the wee hours of the morning, the Geminids do provide observers an opportunity to see a decent display during the pre-midnight hours.

Why? Gemini, the constellation from where the shooting stars appear to radiate, is about 30 degrees above the eastern horizon by 9:00 p.m. You’ll know you’ve seen a Geminid if you can trace the origin of the meteor’s trail back to the radiant point near Gemini’s brightest stars, Castor and Pollux.

All you’ll need to do is select an observing location in advance with a good view of a large area of sky well away from any sources of light pollution. Then on the appointed night keep your fingers crossed for cloud-free skies, dress warmly, and try to stay awake during your observing session.

Don’t just stare at Gemini. Scan around the sky as much as possible without straining your neck. I suggest lying on a lounge chair within a sleeping bag. Keep warm and alert.

The Geminids are fairly bright and moderate in speed, hitting our atmosphere at 21.75 miles per second. They are characterized by their multicolored display (65% being white, 26% yellow, and the remaining 9% blue, red and green). Geminids also have a reputation for producing exploding meteors called fireballs.

While the Geminids are the most consistent meteor shower, occasionally here in Southern New England we aren’t always in the right place at the right time to see this shooting star display to best advantage. However, this year it seems everything will be in our favor. Now it’s in Mother Nature’s hands to deliver.

And one last highlight—on Christmas night you will see Jupiter less than one degree (two full moon diameters) away from the waxing gibbous Moon. Joining in this beautiful sky scene once again will Aldebaran, with the Pleiades star cluster a short distance away.

When you wish to enjoy the beauty of the heavens through a telescope, please visit the local Rhode Island observatories. Throughout the winter months Jupiter will be the primary target of some of the best optical instruments around the state.

Seagrave Memorial Observatory in North Scituate is open to the public every clear Saturday night, although it will be closed on December 1.

Ladd Observatory in Providence is open every clear Tuesday night.

Be sure to check all the websites for the public night schedules and opening times before visiting these wonderful facilities. Wintry conditions can force unexpected closures.

Happy holidays and clear skies to all.