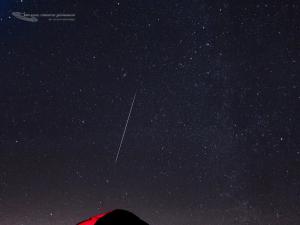 The first meteor shower of 2013, the Quandrantid Meteor Shower, will take place overnight tonight (January 2-3, 2013) starting shortly after 11:00 p.m. and peaking around 3:00 a.m.. Estimates for this year put the expected meteor count up to 80 per hour with burst rates as high as 200. Unfortunately, the 76% waning gibbous Moon will likely rob us of those eye catching numbers. This active winter meteor shower is not one to miss if you can withstand the FREEZING temperatures of pre-dawn January nights.

Quandrantid meteors originate from the asteroid 2003 EH1 which is thought to be a piece of a comet that had broken off centuries ago. These small asteroid fragments, after hundreds of years orbiting the Sun, will enter our atmosphere at 90,000 mph and quickly burn up 50 miles overhead. Meteors will appear to originate from an old, now extinct, constellation known as Quadrans Muralis which is now part of the constellation Bootes. Look towards the handle of the big dipper to the right of the star Alkaid to view the radiant point.

The Quandrantids are not a very well known meteor shower. Some say this is because of the short peak period that this shower produces. I think the VERY cold January night is the real reason this shower is unknown. Last year at Frosty Drew I was joined by four other amateur astronomers for a fantastic night of meteor observation. When looking back I partially remember the meteor shower but absolutely remember how cold it was. Tonight's temperatures will drop to 9°F which in Ninigret Park will be more like 3°F. Regardless, the Quadrantid meteor shower is one of the better meteor showers of the year. Dress properly in loose overlapping layers (thermal underwear; wind resistant parka, pants and gloves; winter boots and socks; scarf; and hat) and you can have a memorable first meteor shower of 2013.

Tips for observing the Quandrantid meteor shower include:
- Lay on a reclining lawn chair so you are facing the sky comfortably.
- Look to the Northeast towards the zenith (directly overhead)
- Bring a blanket or sleeping bag. Think snow covered ground overnight during January. Brrr!
- Be mindful of frostbite and hypothermia, especially if you have children with you!

Note that Frosty Drew Observatory is NOT opening for the Qunadrantid meteor shower though some of us will likely be on the grounds to observe.