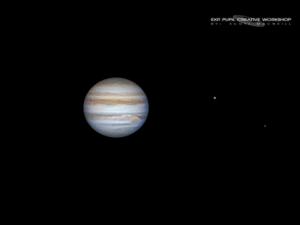 A pleasing photograph of Jupiter by Scott MacNeill

Perhaps you received a telescope during the holiday season and you've been anxious to see what kind of detail it can provide of various astronomical objects. While the winter months can be a difficult time of the year to observe from southern New England, there are a few highlights for the month of February I’d like you to observe. If you don’t own a telescope you can always visit one of the fine local observatories listed at the conclusion of this article.

Even a novice sky enthusiast should be able to train a pair of binoculars or telescope on our nearest neighbor, the Moon. Even low power (magnification) will reward the viewer with a beautiful image of lunar seas and craters. The more magnification one uses the more detail that will be observable. One of the best times view the Moon is during First Quarter when it will be conveniently positioned due south of your location after sunset. The right-most visible half of the Moon will be sunlit. Train your binoculars or telescope along the terminator, which is the line that separates the lit from the unlit surface. During this First Quarter phase the terminator represents the sunrise point on the lunar surface. You’ll see lunar mountaintops and carter rims catching the first rays of sunshine, while the surrounding area still lies in shadow.

The next brightest nighttime object to observe in February is the planet Jupiter. On February 1st this giant world can be found high in the sky after sunset, due south of your zenith point. It will be quite apparent. As the sky darkens you’ll see that Jupiter is located in Taurus, midway between the Hyades and Pleiades open star clusters.

Through a telescope, one of the first things that will catch your eye will be this giant world himself. You’ll easily notice the more prominent dark bands/belts and lighter zones in Jupiter’s cloud tops. You may even glimpse the famous Great Red Spot (GRS). It is nothing more than a huge storm in Jupiter’s clouds that has been active for more than 400 years. Though not as red as it once was, if it is facing the Earth during the time that you’re observing, you may be able to detect it.

Next you will notice up to four small points of light spread out in the plane of Jupiter’s equator. These objects are Jupiter’s Galilean satellites—Io, Europa, Ganymede and Callisto. They were first observed by Galileo back on January 7, 1610, with his one-inch in diameter refractor at just 28 power. It didn't take Galileo long to realize the moons were revolving around Jupiter, proof that the Copernican system was correct (the Sun was at the center of the solar system and the planets revolved around it just like Jupiter’s moons revolved around him).

Despite Galileo's indisputable proof, it was still disputable. Some people even refused to look through his telescope to see for themselves; else they’d be corrupted by the device.

You too can observe what Galileo did back in 1610. As these satellites orbit Jupiter, we earth-bound astronomers are presented with a variety of events to observe, including transits, eclipses and occultations, as well as shadows of the moons upon Jupiter’s cloud tops.

If you've never observed the planet Mercury, then February provides you a great opportunity to view the closest planet to our Sun. As the month begins, Mercury will be too close to our star to be seen. However, as the days progress, this hellish world will rise away from the setting Sun. On the 11th, you can glimpse Mercury very low in the west-southwest after sunset, above and to the left (ten o’clock position) of a dim waxing crescent Moon. By the 16th Mercury will be at its highest elevation above the western horizon. Afterwards it will move closer to the horizon each night until it eventually disappears into bright twilight. Be sure not to point any optical instrument near the Sun. Wait until after sunset before trying to locate Mercury.

If you have a telescope, you can watch Mercury go through phases like our Moon. Because of its orbit about the Sun and our observing position here on the Earth, the image size of Mercury will increase and the phase of illumination will decrease. Here are a few dates with the percentage of illumination and lunar phase comparisons: February 10, 75% (waxing gibbous); February 16, 50% (First Quarter); February 23, 19% (waxing crescent).

When talking about Jupiter I mentioned the Pleiades star cluster. This star pattern should be somewhat familiar to many of you. You see it everyday as you drive down the highways and byways of every city and state. It’s the symbol for Subaru!

While binoculars do show a nice image, a telescope under low magnification (so the entire cluster fits into the field of view) is the ideal sight you want to achieve. This cluster of stars, just less than one hundred million years old, formed from a large dust cloud. The Pleiades are a beautiful cluster of stars approximately 425 light years away.

And finally, take a quick look at the magnificent Orion Nebula. Find Orion and the three stars that represent his belt. Beneath the belt is a curved stream line of stars that can be seen in a dark sky. This group of stars represents Orion’s sword. A pair of binoculars will reveal a fuzzy patch of light where the middle “star” resides. Any low magnification telescope will reveal its true nature—the Orion Nebula, another vast star-forming region in our Milky Way Galaxy. One can see vast wispy tendrils of the nebula that stretch out from the center, which is about 1,350 light years away and some 30 light years across. In the future many more stars will be born from this region of space, but for now there are four primary stars, called the Trapezium, in the central region of the nebula. (This stellar birth place is an incredibly beautiful object that can lure me out into a cold winter night.)

So if you don’t have a telescope of your own to enjoy the splendor of the Orion Nebula and the other wonders of the heavens I've highlighted, then by all means visit one of the local observatories’ open night programs. Check their respective websites before heading out for a visit, just in case wintry conditions on the grounds make visiting hazardous. Please be forewarned to dress for cold temperatures, as the buildings housing the telescopes are unheated. Seagrave Memorial Observatory in North Scituate is open every clear Saturday night. Ladd Observatory in Providence is open every Tuesday night. Frosty Drew Observatory in Charlestown is open every clear Friday night. Winter hours for Seagrave and Ladd are 7:00-9:00 p.m., while Frosty Drew begins at 6:00 p.m. with no set end time.