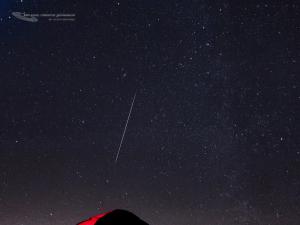 For those of us who reside in the northern hemisphere, the spring season provides only one decent meteor shower to watch shooting stars streak across the sky. While not as productive as the August Perseids or the December Geminids, the annual Lyrids meteor shower’s usually mediocre numbers can occasionally be enhanced.

There has been an increased interest in meteors since our close encounter with Asteroid 2012 DA14 on February 15, and the air burst of a 56-foot, 22-million pound meteor over Russia on the same day. While we don’t expect to witness such events during the Lyrids display, it will be enjoyable to get outside finally to observe with no snow on the ground and the temperature well above freezing. Let’s take a look at the viewing circumstances for this years’ April Lyrids meteor shower.

The peak of the display will be on the morning of April 22, between midnight and dawn’s early light. Normally that would be the optimum time to see 15 to 20 Lyrid meteors per hour at best advantage. Unfortunately a waxing gibbous Moon only three days before Full will severely brighten the sky, definitely reducing the number of meteors that can been observed. It will set around 3:51 am EDT for southern New England observers, leaving only approximately one hour or so of dark sky before morning twilight begins.

The only saving grace is that the radiant point for the April Lyrids lies on the Lyra–Hercules border, near the bright star Vega. It will be high in the eastern sky while the Moon will be in the western sky. To maximize your chances of seeing as many meteors as possible, the best defense will be to at least block the Moon’s direct light with some trees or a building if possible.

The Lyrids are very fast meteors, slamming into the Earth’s atmosphere at a moderate speed of 29.8 miles per second. And for that reason about one-quarter of the meteors leave luminous trains of dust that can be observed for several seconds. The Lyrids are a fairly narrow stream of particles, so don’t expect many to be seen before or after peak day.

Unfortunately Rhode Island’s observatories did not have many open nights for observing throughout the winter months due to cloudy, snowy or rainy weather. It is most likely you haven’t had an opportunity to get a good look at Jupiter through some of the fine telescopes at these facilities. Well, if April skies are clear you better make an effort to observe Jupiter before this giant world moves too low near the western horizon to be seen. You definitely have the entire month of April to accomplish this task. Jupiter and the Moon will be two degrees apart on the 14th. And depending upon the horizons at the local observatories, you may even be able to catch a glimpse of Jupiter until about mid-May.

But don’t worry. Even before Jupiter becomes unobservable with our telescopes, the sky gods will smile down upon us and Saturn will become visible in the eastern sky for our viewing pleasure. On April 1 this beautiful ringed world will rise around 9:19 pm EDT. However, it may be an hour or more before Saturn climbs high enough to be observed, depending upon obstacles like trees and buildings at each observing location. The observing window will get better as the month of April progresses. On May 1, while Jupiter is descending towards the western horizon, Saturn will be ascending the celestial sphere to the east. I’ll write about observing Saturn in a future column.

However, to whet your appetite I’ll note that Saturn’s rings are now tilted at an angle of 18 degrees, providing a splendid view of the northern face of the rings. The image that will greet your eye through a telescope will be simply amazing.

Cross your fingers, arms, legs and eyes that the stormy weather will be behind us as we usher in April. Just remember to uncross your eyes before you get to the telescope eyepiece!

Also, check out the three-day-old crescent Moon between the Pleiades and Hyades star clusters in Taurus on April 13th.

All the local observatories provide magnificent views of Jupiter and Saturn. Please check each of the websites for start times, as they change not only due to later sunset times, but also due to the observance of Daylight Saving Time which began on Sunday, March 10. Seagrave Observatory on Peeptoad Road in North Scituate is open every Saturday night, weather permitting of course. Ladd Observatory
located on Hope Street on Providence’s East Side is open on any clear Tuesday night. And for those of you who are atypical Rhode Islanders, you can always make the journey down to Charlestown to visit Frosty Drew Observatory on any clear Friday night. For those typical natives, just be sure to pack your passport and an overnight bag!