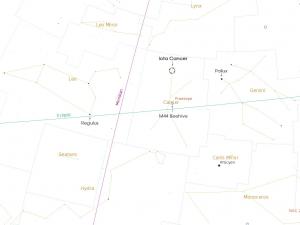 During this month of April, light traveling across the galaxy for 329 years shines at us from the top of the dim constellation Cancer. This light originates from the binary star, Iota Cancer. This fantastic binary star, though tough to see naked eye from urban locations, is quite visible and beautiful using a small backyard telescope. On a clear night this month grab your telescope and set out after twilight to catch a glimpse of the mesmerizing binary awesomeness that Iota Cancer has in store.

Observing Iota Cancer is relatively strait forward as the star is almost directly overhead at sunset. If you are under relatively dark skies free of any major light pollution, you can find the rather dim constellation Cancer by identifying with the naked eye a blurry spot in the sky almost directly overhead when facing south after twilight between the bright star Regulus in Leo and Pollux in Gemini. This blurry spot is the M44 Beehive cluster and resides at the heart of Cancer (The Crab). Once M44 is identified (take a peak with your telescope, it is surely worth it) follow the sky 9° north from the visible center of M44. The brightest star you see will be Iota Cancer. Since Iota Cancer is a magnitude 4 star it will be dim among the brighter stars in the sky and will only be naked eye visible outside of urban viewing locations.

Be sure to take some time to view this beautiful binary star. When observing, do not hurry away from the eyepiece but take a moment to be mesmerized by this lesser known binary that has a reputation to rival the bright, beautiful Alberio binary in the summer sky.