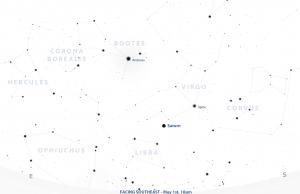 If you have any rudimentary knowledge about astronomy and are like most people, anytime someone mentions the planet Saturn the first image that pops into your head is a planet with an extensive system of rings surrounding it. This sixth planet from the Sun is a magnificent object to observe, even through a small department store refractor. Why? Saturn’s exquisite ring system is a marvelous spectacle to behold.

Richard Proctor (1837-1888), a famous English astronomer, wrote in the many editions of his book Other Worlds than Ours, "One is not surprised that observers who have been studying the heavens for years return again and again to the contemplation of this ringed planet, for there is nothing like it elsewhere in the heavens. I can well remember the sensation with which I saw the ringed planet for the first time. I look on that view as my introduction to the noblest of all the sciences."

Proctor's quote could have easily been stated by me or one of my associates from Seagrave Memorial Observatory. Observing Saturn and his rings for the first time through a telescope can certainly inspire anyone to delve into amateur astronomy to see what other wonders the heavens have to offer.

My first view of Saturn through a telescope was back in 1972 after I had purchased a six-inch reflector from the old Edmund Scientific Co. While I do not have a clear memory of that specific event, and I didn't make any notes about my observation, I’m sure the sight of Saturn and his rings was certainly an inspiration for me to continue my exploration of the heavens.

Furthermore, I wholeheartedly agree with comet discoverer and astronomy writer David H. Levy who wrote in his book, The Sky: a User’s Guide, about his first telescopic view of Saturn, "I was stunned. Having seen the pictures, I knew what Saturn was supposed to look like…From the viewpoint of a child with a tiny telescope, the first look at Saturn's rings was unforgettable…I still wish that everyone could look at those beautiful rings."

While there are many wonderful, high-detailed images of Saturn available on the Web, there is nothing that can replace that eyes-on experience when the photons reflected from this magnificent ringed-world interact with your eye and brain to produce the unmistakable image that is Saturn. If you have your own telescope that opportunity awaits you as soon as you read this column. If you are not currently fortunate to possess one of these fine instruments, then visit one of the local observatories for a detailed view during an open night.

On April 28, Saturn is at opposition, which means it is opposite the Sun in our sky. As the Sun is setting Saturn is rising. Depending upon your observing location, you might not be able to view this ringed world at that time due to it being blocked by trees and houses. However, by 10:00 pm Saturn will be more easily accessible to view about 25 degrees above the southeast horizon. And around the midnight hour Saturn will transit your local north/south meridian, about 36 degrees off the southern horizon. At opposition Saturn is at its closest to the Earth for this year, approximately 820 million miles.

Each successive night Saturn will rise earlier. As we approach the Summer Solstice on June 21 at 1:04 am EDT, you will have to wait a little later for bright twilight to fade. Also, if you don’t know your constellations, Saturn may be a little challenging to find. It will be in Libra on the Virgo border. These two star patterns are not the most recognizable ones in the sky. (See the accompanying finder chart to help you in locating this beautiful ringed planet.)

However, once the sky has darkened sufficiently to reveal the stars, Virgo’s bright star Spica will be about fifteen degrees to the upper right of Saturn. To use Spica as your guide to finding Saturn, all you have to do is remember a catchy phrase that uses the handle in the Big Dipper asterism of Ursa Major to “arc to Arcturus, speed on to Spica.” Saturn’s yellowish hue will make it appear a little paler than Spica’s white appearance.

Saturn is indeed a pleasure to observe even through a small telescope, so make every effort to focus in on this wonderful planet. The very first feature that will catch your eye is the rings. During Saturn’s almost 29½ year orbit of the Sun, we see the rings at varying inclinations. Currently they are tilted at an angle of 18 degrees, affording a view of the northern "surface" of the ring system.

It is amazing that Saturn’s rings are visible at all, considering the planet’s distance from the Earth and the fact that the ring plane is only about 328 feet thick (just larger than the length of a football field). Although there are hundreds of ringlets, you shouldn't have any difficulty seeing the separation between the primary “A” (outer) and “B” (inner) rings, called the Cassini Division. This gap is only 2,175 miles wide. In comparison, the width of the “A” ring is 9,321 miles and the “B” ring is around 16,032 miles across. What ring features can be observed will depend upon what size telescope is used.

The rings are composed of irregularly shaped dirty snowballs, ranging in size from grains of dust to the size of pebbles. There are also some “boulders” as large as several feet across. They all orbit Saturn along the planet’s equatorial plane.

While the rings will command most of your attention, don’t neglect the disk of Saturn himself. The light-colored bands and zones in Saturn’s cloud tops are much less prominent than those of Jupiter. (Very little cloud detail can be seen in small telescopes.) However, bright “spots” do develop from time to time. In 2011 a so called “Serpent Storm” (due to its serpentine shape) stretched completely around Saturn’s North Temperate Zone. It has since dissipated.

In addition, both before and after opposition, one can observe the shadow of Saturn projected onto his rings. Also, as the observing angle of Sun/Earth/Saturn increases a keen-eyed observer should have no difficulty in detecting the shadow of the rings upon Saturn’s cloud tops. These particular viewing circumstances provide a stunning 3-D effect of the Saturnian system.

Also, though Saturn has 62 known moons, at best we can observe the eight brightest with the largest of the telescopes available in Rhode Island. Those moons are: Titan, Rhea, Iapetus, Dione, Tethys, Enceladus, Mimas and Hyperion. The first five or six of the above can be observed in a dark moonless sky using the 12-inch Brashear refractor at Ladd Observatory.

If you or your children have never observed Saturn firsthand though a telescope, then please take advantage of the opportunities provided at the local observatories. Anyone with an Internet connection can see splendid images of the Saturnian system. However, that detached and passive exploration can never substitute for the actual experience of seeing this distant world for oneself. Elicit the same sensation as reported by Proctor, Levy and yours truly as we glimpsed Saturn and his system of rings for the first time.

In conclusion, if you have your own telescope stored away in a closet, basement, or out in a shed or garage, please clean it up and focus your sights on Saturn. Telescopes should be collecting starlight, not dust! But if you don’t have a telescope or the one you do own does not provide a great view of Saturn, I encourage you to visit one of the local observatories. Seagrave Memorial Observatory in North Scituate is open every clear Saturday night for observing. Ladd Observatory in Providence is open every Tuesday night regardless of the weather. Don’t forget about Frosty Drew Observatory in Charlestown on every clear Friday night. Please visit the respective websites for details about opening times and closures.

Volunteers at these facilities are more than happy to share their knowledge of the sky with kindred spirits who can appreciate the beauty of the universe.