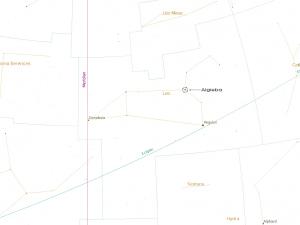 One of the most commonly viewed binary stars of spring, Algieba, also known as Gamma Leonis, lies 130.4 light years away from Earth and has a visible magnitude of 2.2. Algieba is comprised of two stars displaying a rather narrow degree of separation of 4.5 arcseconds. The primary star, Gamma Leonis A, has a spectral classification of K1, is 23 times larger in diameter than the Sun, and presents itself with a bright golden-yellow hue. Gamma Leonis B, the companion star, has a spectral classification of G7 sporting a bright yellow hue, and is slightly smaller than Gamma Leonis A at only 10 times larger than the diameter of the Sun.

Finding Algieba is a cake walk. At magnitude 2.2 it will be bright enough to be seen from any clear-skies location regardless of light pollution. First identify the constellation Leo which during twilight will be just west of the meridian (imaginary line separating the East and West sky) about 60degrees above the horizon when facing South. Leo is made up of the “sickle”, or backward question mark, which makes up the mane of the lion with a triangle to the left making up the back and tail of the lion. Algieba is the second brightest star in the sickle. Starting at Regulus, the bottom star in the sickle and the brightest star in Leo, trace the sickle until you reach the third star. This is Algieba.

Observing Algieba will be quite simple and easily suited for most quality backyard telescopes. The 4.5 arcseconds of separation between each star will make both stars appear quite close together. When observing at less then 100x magnification, the stars will appear to blend together with singularity becoming visible between 80x and 100x magnification. At 100x magnification or more both individual stars will become easily apparent.

Take your time when observing this stunning golden binary star system. Both stars appear a bright golden yellow with the companion star being noticeably smaller. Rumors abound that the companion star at times boosts an ever so slight greenish hue, though I have not observed this personally. After a successful view I am sure Algieba will earn a check mark on your spring time list of awesome targets for star parties, nights out observing with friends, or just a quiet night alone with the stars.