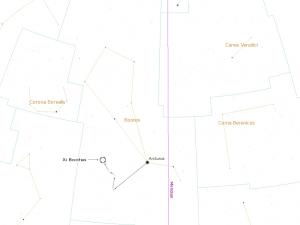 June is a fantastic time of the year to observe the night sky. The bright Sagittarius arm and galactic center of the Milky Way Galaxy rise early like an approaching storm from the southeast. The starscape at this point has switched to summer mode feature rich awesomeness. This month we will turn our aperture towards the constellation Bootes (The Bear Herder) where we find the rather dim yet colorful star Xi Bootes.

A sometimes overlooked star, Xi Bootes, lies a mere 21.9 light years away from Earth with a visible magnitude of 4.6 making this star quite dim even under slightly light polluted skies. Xi Bootes is made up of two stars with a clearly visible degree of separation at 7 arcseconds. Xi Bootes A, the primary star, has a spectral classification of G8, is 10% smaller in diameter than the Sun, and displays bright yellow characteristics. The companion star, Xi Bootes B, has a spectral classification of K4, presenting a distinctly visible red-orange hue, and is slightly smaller than Xi Bootes A at 29% smaller than the Sun.

Finding Xi Bootes in the sky can be somewhat challenging, especially if observing under light polluted skies. At magnitude 4.6 this star will surely be overpowered by local light pollution. Fret not, as the super bright star Arcturus is in the same neighborhood as Xi Bootes and will serve as a suitable guide. Shortly after sunset, while facing South, the bright yellow star Arcturus will be shining dominantly overhead. Once identified, Xi Bootes can be found 20degrees to the left of Arcturus, the north-most star in a small group of four faint stars. When hunting for Xi Bootes be sure not to mistaken the binary star Mu Bootes for Xi Bootes. Mu Bootes is two stars south of Xi Bootes and not nearly as colorful.

Observations of Xi Bootes will easily reveal distinction between both stars with even modest backyard telescopes due to its relatively wide 7 arcseconds of separation. A noticeable yellow with hints of purple will emit from the luminous primary star with a rudy-red present in the smaller companion star. If the colorful differences in these stars do not present themselves, adjust your focus to slightly blur the view and colors should become apparent.

Don't hurry away from the eyepiece when taking in the view of binary awesomeness with this target. The easy separation and vivid colors make this star hard to leave behind and I am sure it will earn a special note on your list of killer binary stars.