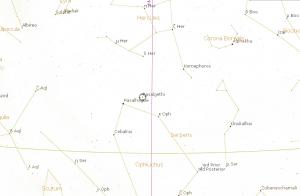 Summer break is here and what a great time to be looking to the sky. July brings warm, late nights with the beautiful wisps of the Milky Way galaxy hanging high overhead. The BBQ is ripping, the beach is hopping, what better way to end a great summer day then a night under the stars. This month we will take a celestial trip 350 light years away into the edge of the constellation Hercules as we zoom in on the stunning binary star, Ras Algethi.

Among some of the brighter stars in the sky, Ras Algethi, has a visible magnitude of 2.8 and is found 350.6 light years away from Earth. This fantastic binary system is made up of two stars with a narrow 4 arcseconds of separation. The companion star, Alpha Hercules B, has a spectral classification of G5+F2 blazing bright blue-green and is also a binary system comprised of two stars. Though we will not be observing this smaller binary system. The primary star, Alpha Hercules A, is a huge red super giant that has a diameter the size of Earth's orbit, a spectral classification of M5, and shows off a clear stark orange.

Finding Ras Algethi in the night sky is a snap. With a bright 2.8 magnitude, this star will stand out even when viewed under moderate to intense light pollution. At mid-July just after 10:00 p.m. EDT, while facing South, Ras Algethi will be about 62° degrees above the horizon when viewed from Southern New England. Look for the brightest star in this area, which is the super bright 2.0 magnitude star Rasalhague, the head of Ophiuchus. Once Rasalhague is identified, hop 3° west and slightly north to the next brightest star. This is Ras Algethi.

Observing Ras Algethi will be easily suited for a good quality backyard telescope. At 4 arcseconds of separation, both stars will appear quite close to each other. If observing with less then 100x magnification, the light from both stars will coalesce making the star look elongated or oblong. Distinct separation of the binary couple will become clearer at 80x-90x magnification with clearly visible separation becoming apparent at 100x magnification or more. Expect a sharply bright orange color from the primary star with a pearlescent blue shifting to hints of green emanating from the companion star.

Take a good long look at Ras Algethi. Relax your eye into the beautiful colors that this binary star shows off. Once you have had your fill of Ras Algethi, take an addition moment to slightly blur your focus and the color differences will become overly apparent. Then take a moment to place a “A” for AWESOME next to this star on your list of summer binary goodness.