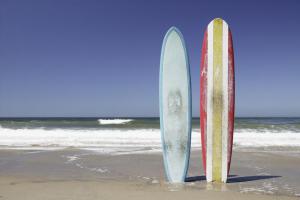 Reading the title of this article, you are probably wondering, what possibly a Dobsonian and a Longboard have in common. Furthermore, you might not even be sure what either of the two are. So with that in mind, I will start with the latter and will then explain what the two have in common.

Dobsonians, are actually a type of mount that supports a telescope; however, when you hear the word Dobsonian, it usually refers to a Newtonian reflector telescope, mounted on a Dobsonian (Alt-Azimuth) base. If you have never seen one, they look similar to a cannon one might find at a 19th century fort.

Longboards which you have probably guessed are a type of surfboard, the kind you would have seen in such classic surf films like: “Endless Summer”, “Big Wednesday” and some of the old Gidget movies. Longboards, hence the name, are long, usually at least 9 feet in length, wide, buoyant and most have a single fin.

So what does a Dobsonian and a Longboard have in common, funny you ask. Both are large, look out of place or retro at best and can have portability issues. But most importantly, both are easy to use and fun! With that in mind, as a beginning astronomer or surfer, both should be one of the first things you own and included as part of a seasoned hobbyist collection.

Let’s start with the Dobsonian. Foremost is its simplicity and ease of use. I can walk out of my house with the Dobsonian in one move, come back for my sky charts and lenses in the next move and after about a 30 minute cool down for the telescope, I’m observing stars, planets, nebulae, etc…, five (5) minutes if I forgo the cool down. On the other hand, my GoTo (computerized telescope often sold to novices for the fact that you don’t have to learn the sky beforehand?) requires several trips. Lets see, we need to bring out the tripod, mount, telescope, battery pack or extension cords, lens; then after about 30 to 40 minutes of setting up, leveling and a one-star alignment, we are now ready to start observing. Heck, all I wanted to do was observe a few galaxies in the Virgo Cluster before the next episode of South Park came on; Arrrrg. Between you and me, the Dobsonian is my go to.

Longboards with their stable platform and buoyant nature, compared with other type of surfboards, are also easy to use. With about an hour lesson from a qualified surfing instructor, you will be catching your first wave in no time. Granted, they aren’t as cool looking as that short, four finned, rocket shaped board you now see on TV, but how cool do you think you look when you can’t even paddle out without tipping over, let alone trying to catch a wave.

Even as a seasoned astronomer, the Dobsonian is irreplaceable. Now and again, you may have some friends come over who are curious about your hobby. What better way to show off a little, than by giving them a quick tour of the night sky. When they see how easy you made it look, you might have a new convert.
As far as that Longboard goes, even as your skill level progresses; there is nothing like taking out your board on that beautiful, cold winter day, when the waves are only waist high and it’s just you and a couple of Harp seals.