The Day the Earth Smiled 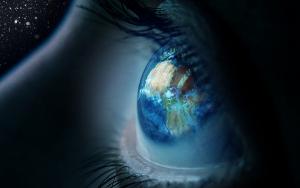 Today, an event is taking place that will open the eyes of humanity (again) to the reality of our place among the cosmos. This event will be, at the same time, humbling and awesome. For better or worse, this will be a day to remember. 23 years ago a similar event took place that forever changed our view of humanity when the Voyager 1 spacecraft turned around and snapped a photo of Earth from 3,762,136,324 miles away. Today, it will happen again.

The NASA Cassini spacecraft, which is in orbit around Saturn, will turn its cameras towards this little planet of awesomeness that we call home and snap a photo today at 5:27p.m. - 5:42p.m. This is the first time a photo like this is being taken with prior public knowledge. Additionally, this is the third time that a photo of Earth has ever been taken from the outer solar system! This humbling event has sparked a massive movement of interest and collaboration across the world. As a result, all day today “Wave at Saturn” events will be taking place across the world. Now we in New England are lucky since we will be on the side of Earth facing Saturn when the photo is taken. Today, Saturn is 897,396,139 miles away from Earth which is about 80 light minutes. So start waving at Saturn at 4:04p.m. - 4:22p.m. and your waves will reach Saturn just in time to be photographed at 5:27 – 5:42. Note that the photo will not show individual people, but how cool would that be!

Today has been called “The Day the Earth Smiled” and that is an appropriate title for the events of today. The photo shoot that planet Earth and all its inhabitants are participating in takes me back to the first shot of Earth from the outer solar system taken by the Voyager 1 spacecraft 23 years ago. This shot is the famous “Pale Blue Dot” photo which inspired the phenomenal book by Carl Sagan titled “Pale Blue Dot: A Vision of Human Future in Space”. This first view of Earth from such a distance opened our eyes to the reality of humanity's existence among the vast cosmic stage. For me it was a moment of humility and a realization of a level of connectedness that exists between all of us to our home planet and the size of our tiny, awesome place among the cosmic arena. Over the years many works have been inspired and created around the narrative of Carl Sagan's famous Pale Blue Dot reading. Like this one:

Today, this is happening again...