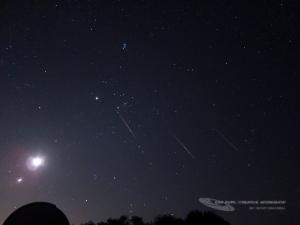 Traditionally the August Perseid meteor shower is one of the best shooting star displays of the year. However, here in southern New England we haven’t observed a decent performance by this annual shower for I don’t know how long. While a bright Moon can severely limit the number of meteors seen regardless of location, weather conditions seem to conspire to prevent local sky enthusiasts from enjoying this celestial sky show.

It still amazes me that many folks are uninformed about the nature of meteor showers. More than 210 years ago scientists believed the appearance of meteors streaking across the sky was an atmospheric phenomenon. Rocks couldn’t fall from the sky! However, in 1803 France, a huge fall of about 3,000 “thunder stones” was witnessed by many citizens in broad daylight. Presented with overwhelming evidence, scientists finally accepted that meteorites were of extraterrestrial origin.

Today we know that most meteors are particles stripped off of comets and deposited in orbit about the Sun. When the Earth passes through these streams of cometary debris, the meteors plunge into our atmosphere at many miles per second and disintegrate. Those events are called meteor showers. Most of the particles are no bigger than a thumbnail.

Some solitary and denser meteors are small asteroids or fragments of them. That scenario was the case of the Russian meteor on February 15 of this year. A 56-66 foot sized stony asteroid weighing an estimated 22,050,000 pounds plunged through the atmosphere over Chelyabinsk and exploded perhaps 15 miles high in the sky. The concussion wave damaged buildings and showered observers with glass when they went to the windows to see what was happening. While most of the object was obliterated in the blast, some small fragments were recovered from the ground. An event of this magnitude is uncommon.

Consequently, there is no safety concern if you decide to watch the Perseid meteor shower. The material shed by Comet 109P/Swift-Tuttle is completely annihilated in our upper atmosphere when the Earth passes through the debris. Anyway, even if a small mass survived the plunge, you’d have a better chance of winning Powerball than being struck by a meteorite!

For us in the eastern United States, the Earth’s passage through the densest portion of the meteor stream occurs during daylight hours (3:00 pm) on August 12. Therefore, I would recommend observing on the night of August 11-12, preferably after midnight when the Earth plows into the particles nearly head-on. I would also observe the following night as well, waiting until the midnight hour.

While you might not observe 60+ shooting stars per hour due to this issue of timing, a waxing crescent Moon will set between 10:00 pm and 10:30 pm during the two evenings noted above. These combined circumstances will still provide an observer with the best conditions possible for the Perseids this year. All you will have to do is to find a viewing location that is as far removed from light pollution as possible to enhance further your observing experience.

The Perseids blaze across the heavens at 134,222 miles per hour and are usually green, red or orange in color. Some members of this shower are bright and often produce exploding fireballs. While you can scan for shooting stars across the entire sky, the members of this shower appear to radiate from an area of sky, called the radiant point, in the constellation of Perseus.

Perseus is well up in the northeast sky after midnight. (See accompanying finder chart.) If you can locate the constellation of Cassiopeia, which looks like an “M” or “W” tipped sideways, then you are close enough. Face in this general direction when you first begin your observing session and gradually follow the radiant across the sky. As Perseus rises higher into the sky, the number of meteors will increase as the morning progresses.

And finally, if you were wondering what that very bright object was in the western sky after sunset the last few weeks, it was our closest planetary neighbor Venus. You can’t miss it, but if you want to be sure, a waxing crescent Moon will pass close to it on August 8 and 9.

Keep your eyes to the skies and hopefully you’ll see more shooting stars than fireflies.