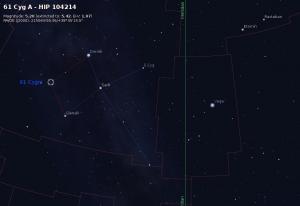 With Summer well under way the beautiful Summer Triangle asterism is hanging high overhead. The summer triangle, made up of the three bright stars Deneb, Vega and Altair, is full of many fascinating objects, considering the bright Milky Way cuts right through the middle. Among this collection of celestial awesomeness, at only 11 light years distant, is a rather dim, yet famous, binary star. This binary star was the first ever star (aside from the sun) to have its distance measured from Earth, is the 15th known closest star to Earth (not including the sun), and has a relatively large change in angular position over time (proper motion). This month we will zoom in on the stunning binary star, 61 Cygni - The Flying Star.

At the very edge of visibility, 61 Cygni has a visible magnitude of 5.2, lies 11.35 light years distant and is found just outside the boundaries of the Summer Triangle in the constellation Cygnus. This super wide binary system is made up of two stars at 28 arcseconds of separation. The primary star, 61 Cygni A is 30% less massive than the Sun, has a spectral classification of K5 displaying a strong deep yellow / orange. The companion star, 61 Cygni B is almost 11% less massive then the primary star at 63% the mass of the Sun, has a spectral classification of K7, displaying an almost identical deep orange with a touch of red. Both stars are separated by an average distance of 84 AU, which is twice the distance of Pluto from the Sun, though the 61 Cygni system's distances vary from 44 AU at their closest to 124 AU at their most distant due to a rather elliptical orbit that takes 659 years to complete a full orbital cycle.

Finding 61 Cygni will be quite a challenge. At visible magnitude 5.2 this chic will be quite dim especially when viewed from even minimally light polluted skies. If viewing from urban locations, a trip outside of the city will surely be warranted. Once twilight comes to an end, face East and look almost strait up to find the easily identifiable Summer Triangle asterism. Deneb, the brightest star in Cygnus, will be the north-most star of the three points of the triangle. Deneb is also the top of the Northern Cross asterism which is found inside the Summer Triangle. Once the Northern Cross asterism is identified, make a square using the stars: Deneb, Sadr (the center of the cross), and Gienah Cygni (the eastern-most star in the cross), 61 Cygni will be at the fourth point of your square.

Observing 61 Cygni will be total pie. With 28 arcseconds of separation you can identify distinction between the stars using binoculars. Any backyard telescope will easily resolve this binary set with higher quality backyard telescopes showing off the fantastic depth of color. Expect a widely placed binary system with one star appearing just slightly dimmer and smaller than the other. Colors will be super apparent with deep yellow to ruddy orange hues blasting off each star resembling two Seville oranges positioned upon a curtain of night.

Take a good look at this historic binary star. Once you have had a long relaxing look, star hop around the Summer Triangle and find some of the fantastic celestial objects visible there. Then come back to 61 Cygni and ponder on this set of stars that are the fourth closest naked eye visible stars to mid-latitude northern stargazers and make a note to regular visit the Flying Star to see if it has changed its position among the cosmos.