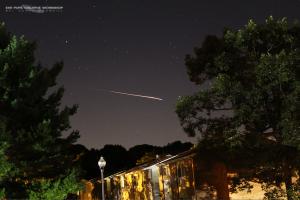 More times than not my column starts out as a weather report. It makes sense. Unless we have clear skies we can’t observe the heavens with the naked-eye or with our telescopes. This fact is lost on some folks who visit the local observatories during cloudy nights. (More on this scenario later.) The spring weather was often cloudy and rainy, while most of Rhode Island received more than ten inches of rain in June. We experienced more thunderstorms than we have gotten over an entire summer season. Add to that the heat, high humidity and hazy skies when it did clear, and local astronomers have not been happy campers. Mix in an abundance of mosquitoes and we can’t wait for summer to end.

While the first frost is still some weeks away, now that September is here we soon expect cooler temperatures to prevail and the skies to become more transparent. The Harvest Moon (the Full Moon nearest the autumnal equinox, which itself begins on the 22nd at 4:44 p.m. EDT) occurs at 7:12 a.m. on September 19.

But before we get that far ahead, there are a couple of sky scenes I’d like you to look for at the beginning of the month. On September 1 you can still spot brilliant Venus less than ten degrees (a fist held at arm’s length provides this measurement) above the horizon after sunset. To the left of it you’ll see blue Spica, Virgo’s brightest star. To Spica’s upper left you can pick out the beautiful ringed-world Saturn. While this magnificent planet has been lost to many of the local observatories due to its low position in the sky, if you have a portable telescope you can still find a location with a good unobstructed western view to get some final views for this year during evening hours.

Venus and Spica will move closer to the horizon each night as the month progresses. On the 8th a waxing crescent Moon will pass within one degree down and to the left of Venus. While Spica will disappear from view around mid-month, Venus will remain just barely visible by month’s end. While Saturn will draw closer to Venus, it will get no closer than three and a half degrees on Sept 18. By month’s end Saturn will be too low to be observed.

In contrast, the outer planets Uranus and Neptune will be easily observable during September and October. These gas giants look like little blue-green marbles through the telescopes available for public viewing in Rhode Island. Be sure to ask any of the scope volunteers to acquire them for you to observe. Not many casual stargazers can boast they’ve seen these distant worlds.

Around here in southern New England I never felt I was in any danger when I went out to observe. Depending upon the time of year you had to watch out for skunks. I’ve heard coyotes howling nearby at Seagrave Observatory and in the woods near my home in Burrillville. A pair of red fox sauntered though my yard one evening, though not while I was observing. Fisher cat are a lot more prevalent now, and you don’t want to tangle with one.

And in recent years at least one black bear has been sighted all over the state. If you are observing with a group of people, these critters will likely avoid making their presence known. But, while you are observing alone I would suggest making your presence known on occasion. Play a radio, but not loud enough to disturb your neighbors. I prefer my Ursa Major to remain high in the sky.

We also must be careful about mosquitoes, for now they might carry EEE and the West Nile virus. Still, this area of the country is not as hazardest as others. My good friend and former Skyscrapers member Greg Shanos moved to Florida. One night he was observing with a group of amateur astronomers from the Myakka River State Park. They had set up in an open area near the parking lot. While they were observing they started to hear some noise in the darkness. They shone their flashlights in the general direction of the noise and all they could see were many eyes staring at them.

You see, this park is noted for its alligators. I’ve bird watched there and it is downright scary even in the daytime. The gators sit right on some of the paths. And they are huge! One of the guides told my wife and I that at night there are only two things in the water at the park – alligators and alligator food!! Greg and the group quickly but cautiously packed up their equipment and left the site.

So observing in Rhode Island isn’t all that bad!

Finally, if you plan on visiting one of the local observatories, please check the sky conditions before you venture out. At Seagrave Observatory and Ladd Observatory people have visited on completely overcast nights expecting to observe the sky. When we have explained that the skies were cloudy, on two occasions the question posed to us was, “Isn’t the scope powerful enough?” Optical telescopes need light from an astronomical object to produce an image. Clouds block the light, so no image. Perhaps we need to invest in a radio telescope!

While the mosquitoes may still continue to bother us in September, I can promise you won’t encounter any alligators in Peeptoad Pond!