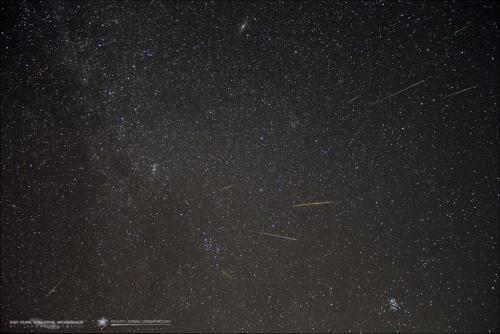 It happened about 28 years ago when I turned 33. Some cosmological constant in the universe changed. It wasn’t noted by any scientist, but my perception of the passage of time was altered somehow. A week passed by as if it were a single day. A month flew by as if it were a week. And now another year has gone into the history books, and I am presenting you with a preview of meteor showers and other astronomical highlights for 2014. At this rate you will be reading another column here in a "month," previewing astronomical events for 2015!

But let’s not get that far ahead of ourselves. Every year has its fair share of items of interest for both the more experienced amateur astronomer and the casual stargazer alike. Let’s take a brief chronological peek into what 2014 has in store for stargazing enthusiasts here in southern New England.

First up is the annual Quadrantid meteor shower during the pre-dawn hours of January 3. While a thin waxing crescent Moon will set early on the night of the 2nd and not diminish this shower of shooting stars, observing the Quadrantids can be challenging for several reasons. For 2014 the peak of activity occurs during daylight hours for us here in southern New England. Combine that scenario with the fact that the Quadrantids display has a very sharp peak lasting only about two hours means we will not observe the normal peak rate of possibly 60-100 meteors per hour. Also, the likelihood of below freezing temperatures will add to the degree of difficulty in observing the Quadrantids. 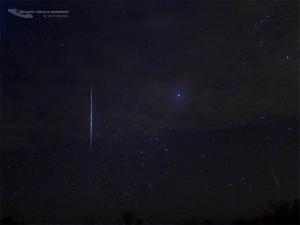 The radiant point, the area of sky from where the meteors appear to originate, is not far from the end star (Alkaid) of the Big Dipper’s handle. From midnight till dawn this area of sky will rise higher and higher above the north-east horizon, and by 4:00 a.m. it will be almost at zenith (directly overhead).

Select an observing location as far from interfering lights as possible. In addition, please dress warmly if you plan on spending more than a just a few minutes outdoors viewing the Quadrantids. Don’t simply stare at one particular area of the sky. Scan around to maximize your chances of seeing as many meteors as possible. The Quadrantids are often blue and frequently blaze more than halfway across the sky at 25.5 miles per second.

In addition, here are a few items of interest that will await us as the year progresses. Some of these astronomical objects and events may be the focus of a future column.

On January 1, Jupiter will already be well-placed for telescopic observing from the local observatories before 9:00 p.m. If you have never viewed this giant world through a telescope I encourage you to do so at your earliest opportunity. Jupiter’s atmospheric bands and zones will be readily apparent, as will be his four Galilean moons. Jupiter will remain in the constellation of Gemini during this observing “season,” which will last until mid- to late-May, depending upon each observatory’s western horizon.

If you have never seen our solar system’s innermost planet Mercury, then you might wish to attempt an observation on February 1. Mercury never reaches a high altitude above one’s horizon, and on this date it will be less than ten degrees (a fist held at arm’s length provides this measurement) above it. While locating this hellish world can be a challenge, that evening a waxing crescent Moon will be about 8.5 degrees above Mercury after sunset.

Mars will be an exciting planet to view for a portion of 2014 (through mid- to late-July). The Earth has been approaching our neighbor and the telescopic apparent size of the red planet has been increasing. On April 14th Mars will be at its closest distance from the Earth at approximately 57,406,300 miles, and it will shine at magnitude -1.5. While this distance is not one of Mars’ closest approaches, telescopes will still be able to provide images of dusky surface features and possibly glimpses of its then diminished shrinking northern polar cap. (Summer began in Mars’ northern hemisphere on February 15.) At 9:00 p.m. EDT that evening it will be about 25 degrees above the south-southeast horizon. If you need a guide to locate Mars on that date, the Full Moon will be about 6.5 degrees below the red planet.

There will be a total lunar eclipse on April 15, the partial phase beginning at 1:58 a.m. Totality occurs at 3:06 a.m. and ends at 4:24 a.m. Locally, the Moon will set while the outgoing partial phase is still underway. For all you photographers out there, this event is a great opportunity to capture some beautiful images. All times are EDT.

During mid- to late-May beautiful Saturn will be rising earlier in the evening, allowing this magnificent planet to be observed during the public nights at the various observatory facilities throughout Rhode Island. Saturn’s rings will be wide open, allowing an observer to see them in all their glory. The image of Saturn through many of the larger telescopes will simply evoke oohs and aahs among the observers.

Unfortunately one of the best meteor showers of the year, the August Perseids, will be severely hampered by moonlight this year.

On October 8, once again during the early morning hours, another total lunar eclipse will occur. Regrettably, we will see only the partial phase before totality and only 31 minutes of totality here in Rhode Island, as totality begins at 6:25 a.m. EDT and the Moon sets at 6:54 a.m. EDT. Regardless, such an event is still well worth watching.

Two weeks later on October 23 there will be a partial solar eclipse that will begin just after sunset. Unfortunately this event will not be viewable from Rhode Island. However, if you travel to Hartford, Connecticut, and you can find an absolutely dead horizon, you’ll be able to see just a tiny sliver of the Sun disappear as the Moon begins to slide in front of the solar disk. The farther west and northwest one travels, more of the Sun will be covered. At maximum obscuration just less than two-thirds of the Sun will be covered by the Moon. So head west if you wish to experience one of Mother Nature’s special astronomical events.

In conclusion, please remember that the local observatories do remain open year-round to provide incredible views of the heavens with their wonderful telescopes. These facilities are unheated, so dress warmly. Seagrave Memorial Observatory in North Scituate is open every clear Saturday night. Ladd Observatory in Providence is open every Tuesday night. Frosty Drew Observatory in Charlestown is open every clear Friday night. Snow or ice can force closures, so please check the respective websites for any cancellation notices before venturing out for a visit. Currently the winter hours for Seagrave and Ladd are 7-9 p.m., while Frosty Drew begins at 6:00 p.m. with no set end time.

Please clip and save the following chart showing the observing prospects for the 2014 meteor showers. These displays of shooting stars only require your eyes, dark skies, and patience to enjoy. 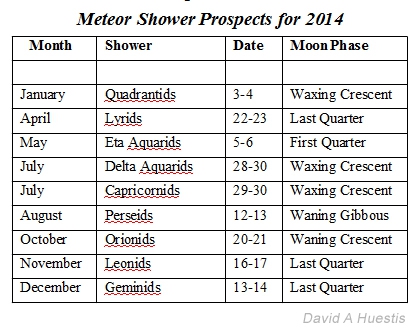 Keep your eyes to the skies for 2014 and always.