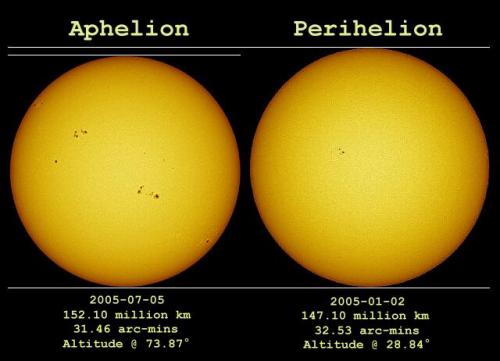 This has got to be one of the trickiest, and most confusing times of the year.  As we here in the north are struggling to stay as warm as possible, we are experiencing what to many is not possible: Being as close to the Sun as the Earth can be.

In the early 17th century, Johannes Kepler, in utilizing the observations of his former boss, Tycho Brahe, realized that Brahe's observations could not be mathematically satisfied using circular orbits for the planets.  His calculations only worked if the orbits were elliptical.  Almost a decade after Brahe's unfortunate death - the reason for it still has to be confirmed - Kepler, in 1609, introduced the first two of his three laws of planetary motion:

-Planets travel around the Sun in elliptical orbits, with the Sun at one of the focus points

-As planets move this way, they create equal areas in equal times.

These two led to his mathematical understanding of the positions of the planets as they revolve around the Sun, and his third law, almost a decade later:

-The planets' periods are proportional to their distances from the Sun.

The time a planet takes to revolve around the Sun in years squared is directly proportional to its radius from the Sun cubed (using the standard measurement for the solar system - the astronomical unit, defined as the average distance between the Earth and the Sun). Take any planet and do the math.  Remember: although the numbers will be the same (or very close), this is not a direct mathematical equation, because the units are different on both sides. 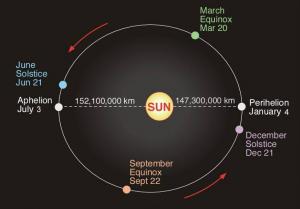 Coming back to perihelion: Ask most people what causes the seasons, and almost everyone will say it is because of the differing distances between the Earth and the Sun, that the Sun is closest to us in summer, so it must be hotter.  In fact, in an experiment done by a Massachusetts educational company in the late '90s, a group of scientists went to a Harvard graduation and asked many of the students that question, and received that answer.  The graduates were surprised to learn that wasn't the case.  The Sun reaches its closest to the Sun, perihelion, in early January, normally our coldest time of year.  And, yes, it is summer in the Southern Hemisphere right now, but the actual change in distance, only about 5% during the course of the year, doesn't make their summers warmer than ours.

If you truly want to believe in this concept, wait until the Sun/Earth distance is the greatest, in early July, and notice how "cold" it is then.  In the meantime, Happy Perihelion!