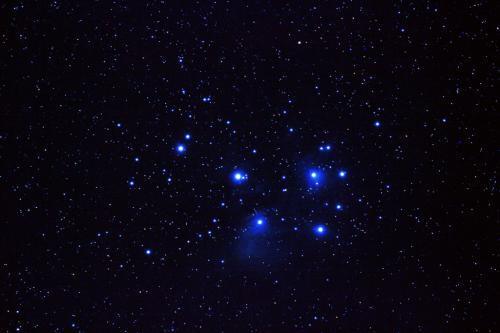 Look, up in the sky! It’s a bird! It’s a plane!! No, it’s a bull!!! Taurus the Bull, that is. Taurus is an easy constellation to find, and it has several objects of interest for stargazers equipped with only binoculars or a small telescope.

On the next clear night go outside at around 7:00 p.m. and face south. About two-thirds of the way above the horizon to a point directly overhead (zenith), look for a V-shaped cluster of stars Or if you’d rather, look straight up and let your eyes drift slowly southward about one-third of the way towards the southern horizon. (See accompanying star map.)

That open star cluster is called the Hyades, and it forms the bull’s face. The vertex of the V forms his snout, the orange star Aldebaran is his right eye, and two stars out beyond the V are the bull’s horns. Aldebaran is a giant star approximately 65 light years away and about 44 times the diameter of our Sun. If it replaced Sol at the center of our solar system it would extend outward almost to Mercury’s orbit. Aldebaran is also the 14th brightest star in our sky.

The stars of the Hyades all formed from the same nebula (dust cloud), and the cluster is the nearest open cluster to our solar system at about 153 light years distant. Please note that Aldebaran is much closer to us and is not part of the Hyades cluster. It’s simply a matter of perspective from our vantage point.

Need another clue to find the Hyades? There is another bright open cluster of stars called the Pleiades just above and to the right of the Hyades. This grouping of six stars resembles the shape of the little dipper (with which it is often confused), only on a much smaller scale. The Pleiades stars also formed from a common dust cloud, perhaps similar in appearance to the Orion Nebula today. They are much farther from the Earth at a distance of approximately 425 light years. Long photographic exposures show some dust surrounding the cluster, but it is now believed it is a dust cloud through which the Pleiades is passing, and not remnants of the original stellar nursery from which it formed. (See accompanying image obtained by Skyscrapers’ secretary and past president Tom Thibault.)

(Does the Pleiades open cluster look somewhat familiar to you for some reason? It should if you are an observant person. You see it every day as you drive down the highways and byways of every city and state. It’s the symbol for the Japanese car brand Subaru!

Still can’t find this region of sky? You can download your own planisphere (starwheel) from Uncle Al's Sky Wheels on the Internet free of charge. I suggest printing it on heavy card stock paper so the starwheel remains rigid during use. Simply follow the included assembly directions.

Like most of the constellations, many diverse cultures have depicted Taurus similarly, usually giving it the attributes of an ox or bull. It may even be one of the oldest constellations. Why? From around 4000 B.C. to around 1700 B.C., the vernal equinox (beginning of spring) was in Taurus. This fact alone made it revered among ancient peoples.

In addition, let’s examine what classic mythology says about Taurus. The god Jupiter fell in love with the beautiful Europa. To attract her attention he transformed into a snow white bull. When Europa saw this beautiful animal, she climbed on top of his back. She may have been beautiful, but she wasn’t very smart. Jupiter made off with her. Jupiter's exploit is commemorated in the sky as Taurus, and Europa had a continent (Europe) named after her.

Also, the prominent Pleiades have a mythology of their own. They were seven beautiful sisters who were pursued by Orion. They didn’t like it one bit, so they pleaded with Jupiter for help. He changed them into doves and away they flew into the sky to find refuge among the stars. There the Pleiades dwell today, still being pursued by Orion to the east, with Taurus lying between them. Orion is too busy fighting off the bull to even notice them.

Observing objects within Taurus can be quite rewarding with even low magnification optics. That includes both the Hyades and the Pleiades open clusters. While the more compact Pleiades look good to the unaided eye, a pair of 7 X 50 binoculars offer an even more striking view. Using a low-power eyepiece on a telescope so the entire cluster appears in the field of view will be very rewarding. The Pleiades remind me of diamonds scattered upon black velvet. What do you see?

And last, but not least, Taurus contains the remnants of a supernova explosion. This smudge of nebulosity, called the Crab Nebula (also known as M1), can be seen with a three-inch or larger telescope. Dark skies are a necessity though. Larger telescopes show more intricate detail of the gases that were spewed out by the cataclysmic star explosion that occurred in 1054 A.D. A good star chart is required to find this beautiful object. Otherwise, ask one of the telescope operators at any of the local observatories to show this stellar remnant some 6,500 light years away. 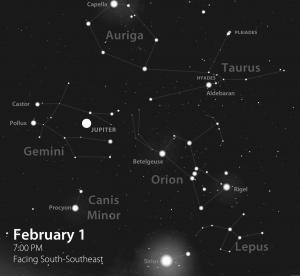 While you’re enjoying the beauty of Taurus and his star clusters, direct your gaze to the east (left). You’ll see a bright object nestled within the stars of Gemini. (See star chart again.) It’s the planet Jupiter. Even a small telescope will reveal his four bright Galilean moons. If you don’t have a telescope, visit an observatory to observe the banded belts and zones detail of Jupiter’s cloud tops and possibly experience an event involving one of the moons.

So far this winter the extreme cold has kept many amateur astronomers indoors. However, once the temperatures moderate, spend some time out in the clear and transparent skies to marvel at the wonders of the universe.

In conclusion, please remember that the local observatories do remain open year-round to provide incredible views of the heavens with their wonderful telescopes. These facilities are unheated, so dress warmly. Seagrave Memorial Observatory in North Scituate is open every clear Saturday night. Ladd Observatory in Providence is open every Tuesday night. Frosty Drew Observatory in Charlestown is open every clear Friday night. Snow or ice can force closures, so please check the respective websites for any cancellation notices before venturing out for a visit. Currently the winter hours for Seagrave and Ladd are 7-9 p.m., while Frosty Drew begins at 6:00 p.m. with no set end time.