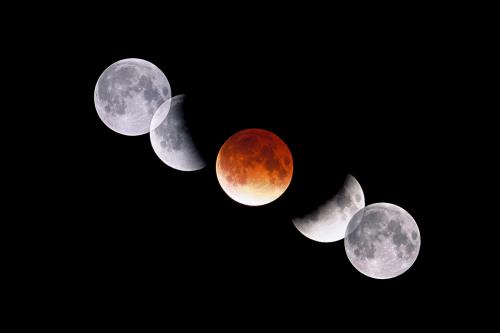 A five hour time-lapse of the November 8, 2003 total lunar eclipse on a single frame of film. Image Credit: Robert Horton

Is this time of the year a little too “taxing” for everyone? Well, I’ve got the perfect astronomical event to help you relax. On April 15, stargazers here in Southern New England will have an opportunity to observe a total lunar eclipse. Though the Moon will set before the eclipse completes, we will be able to watch this celestial event from the beginning until just after the outgoing partial phase ends.

For some of you this lunar eclipse will be challenging to observe. Not technically challenging mind you – temporally so. It occurs on a Tuesday morning between midnight and dawn. A workday for most. A schoolday for many others. However, if the weather cooperates, you can catch some shut eye during the previous evening, and then set an alarm clock for the specific phases of the eclipse you’d like to observe. A full schedule of the eclipse can be found at the conclusion of this column. Use it to plan out your morning.

While I encourage more dedicated Moon observers to watch the eclipse from start to finish, many casual stargazers may consider that decision sheer lunacy! Why not at least try to observe all of totality? This guide will provide all the details you’ll need to understand and enjoy the event. All times are EDT (Eastern Daylight Time), also known as DST (Daylight Saving Time).

A total lunar eclipse occurs at Full Moon when the Sun, Earth and Moon are in a straight line. With the Earth positioned in the middle of this celestial configuration, its shadow is projected onto the lunar surface.

The eclipse technically begins at 12:53:37 a.m. when the Moon, nestled among the stars of Virgo, slides eastward into the Earth’s light penumbral shadow. This dim initial phase is undetectable. Only as the Moon slides deeper into the penumbral shadow will a keen-eyed observer see a subtle shading of the lunar surface from left to right. It is just prior to the Moon entering the Earth's dark umbral shadow that one notices that the moonlight looks somewhat subdued. 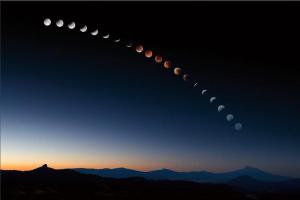 When the Moon first encounters the dark umbral shadow at 1:58:19 a.m., the partial phase of the eclipse begins. For one hour and eight minutes the Moon will move deeper and deeper into the dark shadow, generally from left to right. Then at 3:06:47 a.m. the Moon will be completely immersed in the Earth’s dark umbral shadow and totality begins. Will the Moon completely disappear from the sky during totality? It all depends upon how much dust is in the Earth’s atmosphere at eclipse time. We’ll know by mid-totality at around 3:45:40 a.m. Totality will last until 4:24:35 a.m. for a total duration of one hour and eighteen minutes.

During totality please take careful note of the various hues of color on the lunar surface. Enhance your view with binoculars or a small telescope if you have them. The lunar landscape often looks ashen during totality, with subtle copper, orange or red tones scattered about. And the colors often change as totality progresses. So watch carefully. It is truly a beautiful sight to observe.

In addition, throughout the eclipse carefully scan the limb (edge) of the lunar disk using a telescope. This region of space is star-rich, so you’ll notice stars being covered on the left limb and uncovered on the right limb as the Moon moves eastward through the star fields.

Totality ends at 4:24:35 a.m. when the Moon begins to leave the dark shadow and sunlight returns to its surface. For one hour and eight minutes the partial phase will continue until the entire Moon is completely illuminated once again at 5:33:04 a.m. For a while the Moon’s light will still look somewhat subdued as the Moon will remain within the light penumbral shadow until 6:37:37 a.m. when the eclipse ends. Usually in a dark sky you would be able to detect this shadow soon after the partial phase completes. However, Sun rise is at approximately 6:05 a.m., so bright twilight will most definitely spoil the view. Also, the Moon sets locally around 6:12 a.m., and unless you have an unobstructed west-southwestern horizon you’ll lose sight of the Moon before then anyway.

Throughout the eclipse I want you to notice the bright object below the Moon. It is Virgo’s brightest star Spica. Also, above and to the right about 7.5 degrees away you’ll see reddish Mars. Before the eclipse begins only a few bright stars will be seen since the Moon is full. As the eclipse progresses and the sky becomes darker, watch as the fainter stars emerge into visibility. Afterwards the dimmer stars will “disappear” when the lunar illumination returns.

I hope the weather will cooperate on the morning of April 15 for stargazers of every interest level to take advantage of the magnificent circumstances which produce the beauty of a total lunar eclipse. If you miss this one for any reason we will have another total lunar eclipse opportunity on October 8. However, once again that one will also occur during the early morning hours. And regrettably, we will see only the partial phase before totality and only 31 minutes of totality here in Rhode Island before the Moon sets.

Below is a quick glance chart of the important phases of the April 15 total lunar eclipse. All times are Eastern Daylight Time.

Seagrave and Ladd will not be open for this total lunar eclipse. Frosty Drew plans on opening for the entire event. See their website for updates.