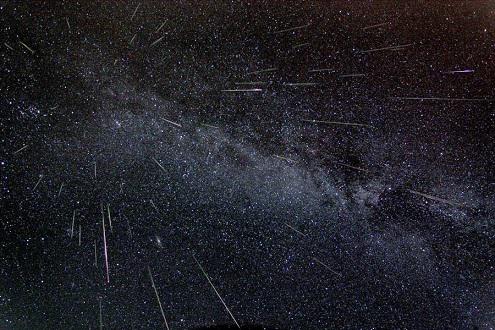 NASA's Lunar Reconnaissance Orbiter (LRO) is celebrating the 5th anniversary of its launch on June 18th. LRO is responsible for many of the awesome high resolution photos of the Moon we have been seeing in the news these past few years. So as a celebration piece, NASA is presenting The Moon as Art collection. This collection of images were all created using data gathered by LRO over the past 4.5 years. Though NASA has chosen 5 potential images for the collections cover, your vote is needed to decide what image will actually be chosen. Visit LRO from May 23rd through June 6th to cast your vote for the photo that you think should be on the cover of the LRO Moon as Art collection. The winning photo will be announced on July 18, 2014.

The May Camelopardalids – a new meteor shower, will be coming to the skies of North America overnight tonight. This meteor shower is the result of Earth passing through the debris field of comet 209P LINEAR for the first time. 209P LINEAR was discovered in February 2004 and was identified as a periodic comet that passes by Earth's orbit every five years. Comet fragments along this path left behind during the 1800's will intersect with Earth tonight The big question is how active the comet was during the 19th century? If the comet was quite active, similar to other comets that we observe, then we could be in for quite a show tonight. Though the possibility also remains that the comet was not active at all during that time period which will keep meteor counts at a minimum.

Meteors will appear to originate in the sky from a point in the northern constellation: Camelopardalis, just West of the North Star. Additionally, fragments produced by comet 209P LINEAR are likely a bit larger and moving a bit slower than the average meteor shower. This could result in very bright, slow moving meteors. Since the frequency of larger than average meteors is possible, there is a chance that we can observe meteor strikes on the Moon. Since the Moon is in a slender crescent phase, strikes on the shadow side can be seen as flashes. New England has caught wind of the potential for awesomeness tonight and is lashing out with dismal weather. Let's hope that New England weather can chill out for a bit and allow for some viewing.