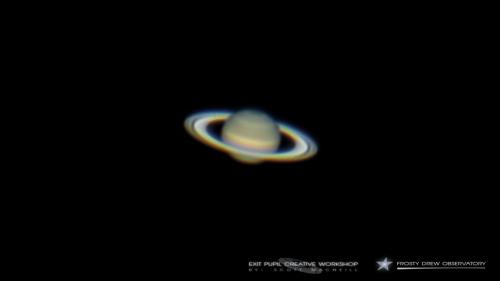 “One of the first things that persons unaccustomed to astronomical observations ask to see when they have an opportunity to look through a telescope is the planet Saturn. Many telescopic views in the heavens disappoint the beginner, but that of Saturn does not … the untrained observer is sure to be greatly impressed by the wonderful rings…No previous inspection of pictures of these rings can rob them of their effect upon the eye and the mind. They are overwhelming in their inimitable singularity, and they leave every spectator truly amazed.”

So wrote Garrett P. Serviss in his 1901 book, Other Worlds. And my associates at Seagrave and Ladd Observatories and I would wholeheartedly concur. Even a small telescope will reveal Saturn’s magnificent ring system. Read on to learn how you can use your own telescope to discover the beauty of Saturn and his rings. Don’t have a telescope? Then visit one of the local observatories for splendid views through some of the largest instruments in southern New England.

First, it is necessary to know where this sixth planet from the Sun can be found in the sky. On June 1, in deepening twilight at 9:00 p.m., Saturn will be approximately 26 degrees above the southeast horizon, residing among the stars of the constellation Libra. It will shine like a pale yellow star. If you wait an hour, Saturn will be five degrees higher in the sky. The red star Antares in Scorpious will be about 20 degrees (two fists held at arm’s length provides this measurement) away from Saturn in the seven o’clock position. Virgo’s brightest star Spica, white in color, will be about 24 degrees to the upper right (two o’clock position) of Saturn. Saturn will be slightly brighter. To the upper right of Spica you will find reddish Mars. Saturn will be a little fainter than Mars. 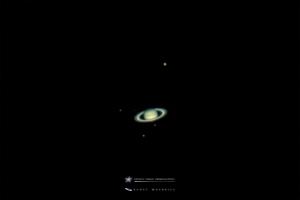 On May 10, Saturn was at its closest distance from the Earth for this year, about 827 million miles. (Last year’s close approach was 820 million miles.) By June 1st that distance will have increased to about 833 million miles. Despite these vast distances, the view through a telescope is spectacular. You’ll immediately see the rings. The north face of the ring plane will be tilted almost 22 degrees toward the Earth. (Last year the tilt was only 18 degrees.) With the rings so wide open, this configuration allows much detail to be seen. In June 2017, they will reach their maximum tilt of 27 degrees.

It is really amazing that Saturn’s rings are visible at all, considering the planet’s distance from the Earth and the fact that the ring plane is only about 328 feet thick (just broader than the length of a football field). Although there are hundreds of ringlets, you shouldn't have any difficulty seeing the separation between the primary “A” (outer) and “B” (inner) rings, called the Cassini Division. This gap is only 2,175 miles wide. In comparison, the width of the “A” ring is 9,321 miles and the “B” ring is around 16,032 miles across. What ring features can be observed will depend upon what size telescope is used. 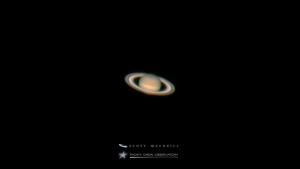 The rings are composed of irregularly shaped dirty snowballs, ranging in size from grains of dust to the size of pebbles. There are also some “boulders” several feet across. They all orbit Saturn along the planet’s equatorial plane.

Though Saturn is a gas giant a little smaller than Jupiter, it does not exhibit the prominent bands and zones in its cloud tops as does its more massive cousin. Usually not much detail can be observed at all on Saturn’s disk. In fact, if it weren’t for Saturn’s ring system, this planet would be quite a boring destination for most amateur astronomers and the public alike.

What one can look for is the planet’s shadow projected onto Saturn’s rings. In addition, with larger telescopes, a challenge is to observe the shadow of the rings upon Saturn’s cloud tops. These viewing circumstances provide a stunning 3-D effect of the Saturnian system without having to wear the special glasses.

Also, though Saturn has 62 known moons, at best we can observe the eight brightest with the largest of the telescopes available in Rhode Island. Those moons are: Titan, Rhea, Tethys, Dione, Iapetus, Enceladus, Mimas and Hyperion. The first five of the above can be observed in a dark moonless sky using the 12-inch Brashear refractor at Ladd Observatory.

So during the next few months, plan on treating yourself and your family and friends to wonderful views of Saturn. Whether it is observed through your own telescope or one of the instruments at any of the local observatories, you won’t be disappointed. 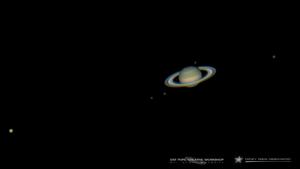 While anyone can view fantastic images of the heavens on countless websites, nothing can stimulate your mind better than photons travelling though hundreds of millions of miles of space to reach your eye at a telescope eyepiece. This firsthand experience will far eclipse simply looking at images in any other media.

For as Carl Sagan said in his book and PBS television series Cosmos back in 1980, “We are made of star stuff.” Reconnect with the heavens. Become one with the universe from which we evolved.

Experienced sky interpreters are on hand to provide guided tours to the wonders of the heavens.