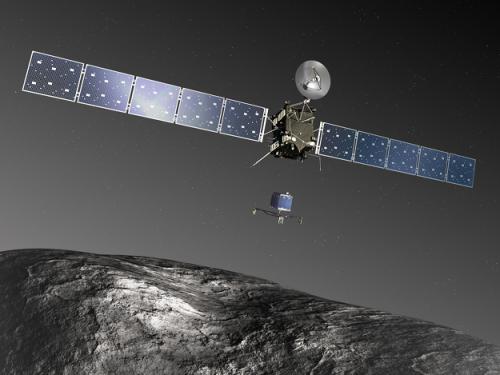 As we continue to revel in our holiday frivolities and make last minute preparations for the close of 2014, I start to reflect on the year as a whole. What awesome things have humans accomplished in 2014? What moments will define 2014 once it is passed? And what amazing accomplishments, and terrible disasters await us in 2015. These thoughts and reflections bring out the sentimental side in me and bring to light the beauty of human creativity and perseverance.

2014 was a huge year for science and astronomy. We flawlessly launched and landed the next human crew capsule that will take us to Mars. We discovered water and organic molecules on Mars. We designed a tool on Earth and beamed that design to the International Space Station where it was printed and utilized. We discovered the first validated Earth-size planet in the habitable zone around another star. We discovered water vapor on dwarf planet Ceres. We created the first ever global geological map of Jupiter's moon Ganymede, the largest Moon in the Solar System.

We have taken steps further in the identification of gravitational waves in the Cosmic Microwave Background. The first ring system around an asteroid was discovered around 10199 Charilko. Evidence of a large subsurface liquid ocean was discovered on Saturn's moon Enceladus. NASA's Lunar Atmosphere and Dust Environment Explorer (LADEE) mission successfully tested a massive upgrade in space based data communication. Organic molecules have very likely been discovered on the surface of Comet 67P.

Aside from stunning discoveries and accomplishments there have also been infamously staggering discoveries and realizations. By the end of the century, many previous Winter Olympic venues will be devoid of snow due to increasing global temperatures. Increases in Arctic sea ice melting is reducing Earth's albedo (a measure of how much light is reflected at the surface) at a faster rate than previously forecast, meaning that Earth is absorbing more energy. May, June, August, and September's global temperatures were historically the hottest recorded for those months. It is clear that climate change as a whole is the single most substantial threat facing humans today.

The pinnacle of the year, in my opinion, was the remarkable, almost flawless sequence of events performed by the European Space Agency (ESA) Rosetta mission. Humans have reached the point where our technology can land us on a comet allowing us to study real-time changes as the comet accomplishes perihelion. And we did it with hardware that is ten years old!

In 2015 we are poised for a continuation in the trend of mind-blowing discoveries and accomplishments. Spring will see the NASA DAWN mission acquire orbit around the Ceres, the only dwarf planet in the Asteroid Belt. Summer will see the NASA New Horizons mission arrive at Pluto and, for the first time, captured stunning detail and data of the dwarf planet and its satellites. We can also likely expect the frightening report that 2014 was the warmest year in recorded history.

The beauty of human curiosity and enthusiasm is all around us. Thinking on the amazing and terrible things we have done is humbling, mind-boggling and terrifying. With the biggest challenges of our existence laying ahead of us, I for one, take solace that human perseverance is un-matched and the core of our spirit is in new adventures. We don't just want to survive, we want to succeed as we reach for the sky and we are awesome at doing just that!