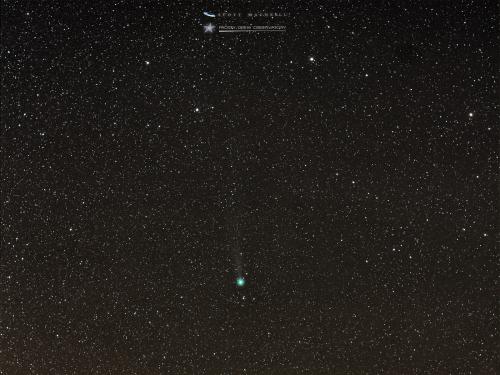 Among all the awesome things happening during the start of the Winter season and the coming New Year, we have an excellent addition coming to the Northern Hemisphere sky this Winter. Comet C/2014 Q2 (Lovejoy) will be rising higher every night for all of us Northern Hemisphere residents, and may become naked eye visible just after the turn of the year.

Comet Lovejoy was discovered on August 17, 2014 by comet hunter, Terry Lovejoy and is considered a long period comet. Historically C/2014 Q2 had an orbital period around the Sun of about 11,500 years. Though its current encounter with the Sun will alter its orbit, resulting in a period adjustment of 3,500 years. After leaving the planetary region of the Solar System, Lovejoy's orbital period will be reduced to about 8,000 years. En route to the Sun, Lovejoy will pass Earth on January 7th at 43,600,000 miles distant. Then on January 30th,, Lovejoy will achieve perihelion (its closest point to the Sun) at a distance of 119,912,991 miles. Which is 1.29 times the distance the Earth is from the Sun.

At Frosty Drew Observatory, we will begin our observation of C/2014 Q2 just after Xmas. As we move into the New Year, the comet will continue to rise higher in our skies as well as brighten up. We expect Lovejoy to be a regular target in the weeks to come that will continue to mesmerize Frosty Drew visitors through the month of January and perhaps longer. Get out there this Winter and check out what could be a beautiful naked eye comet.

Check out our Comet C/2014 Q2 Lovejoy Gallery for photos of the comet shot at Frosty Drew Observatory.

All of us astro-geeks at Frosty Drew Observatory are hoping you have a Happy Winter Solstice and a fabulous New Year!