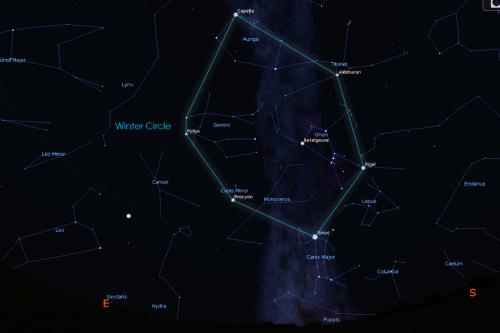 I’m sure many of you can recognize a few of the major constellations in the night sky. Many of these star patterns have come down to us from the dawn of the earliest civilizations. Before light pollution began to diminish our view of the heavens, everyone could see these stellar pictograms.

Today we have a great understanding of that heavenly vault of stars. Though they look like they are just out of reach above our heads, these suns are many trillions of miles from our solar system.

While there are 88 officially recognized constellations that fill the skies surrounding the Earth, stargazers like to create their own stellar asterisms by combining stars from several star patterns.

I’m sure you’ve heard of the Summer Triangle. This shape is formed by connecting three bright stars— Deneb (in Cygnus), Vega (in Lyra), and Altair (in Aquila). This triangle of stars is high overhead during mid-summer.

Well, the winter sky has its own special asterism, and this one is huge and includes a total of eight bright stars. It’s called the Winter Circle or Winter Hexagon. I’ll explain why you can get both shapes from the stars.

Please examine the basic star map accompanying this article. This chart represents the sky in mid-February at 8:30 p.m., looking from a point directly overhead towards the southern horizon. A circle, or actually an ellipse, can be drawn through each of the labeled stars. However, you can also draw a straight line from one star to the next and create a hexagon. Betelgeuse, though inside either pattern, is still considered part of the asterism.

The winter sky contains many of the brightest stars we can see from the Earth. In fact, the Winter Circle contains seven of the 23 brightest. And these stars are but a few members of the estimated 400 billion plus stars that comprise our Milky Way Galaxy.

Before we examine each of the stars in the Winter Circle, let’s review three important terms. First, the brightness of any celestial object is called its magnitude. The basic idea is that the more negative the magnitude, the brighter the object. The more positive the magnitude, the dimmer the object is. So the Sun is -26.74, the Full Moon -12.92, Venus -4.89, Saturn approximately 0, well known Polaris (the North Star) is magnitude +2, and the naked-eye limit with no light pollution is magnitude +6. Pluto is about +13.65. (Usually the plus sign (+) is assumed and not used, but I do so in this column for clarity.)

Second, a star’s distance is measured in light years. One light year is equal to just under six trillion miles. Third, the spectral classification of a star is categorized using the following letters: O, B, A, F, G, K, M, and often followed by additional numbers and letters to further refine the classification. “O” stars are the hottest while “M” stars are the coolest. 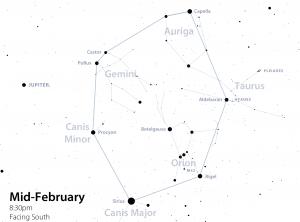 Let’s start our tour of the Winter Circle with the brightest star we can see in the sky (besides the Sun of course) — Sirius. Sirius is in Canis Major, the Big Dog. Sirius shines at magnitude -1.44 and it is 8.7 light years away. Do the math and this fairly close neighbor to our Sun is 52.2 trillion miles from us. For you Rhode Islanders that’s much farther than Woonsocket or Westerly! Sirius is a hot, blue-white star (spectral class A0) about 1.7 times the diameter of our Sun.

Next we move northward and clockwise in the sky to locate Procyon in Canis Minor, the Little Dog. Procyon is a white star (F5) shining at magnitude +0.40 and is 11 light years distant. It’s about twice the diameter of our Sun. Moving farther northward we encounter the Gemini twins, Pollux and Castor. Pollux is 34 light years distant, while Castor is 18 light years farther away at 52. Pollux is a cool, orange giant (K0) ten times the Sun’s diameter, while Castor is a hot, blue-white star (A1) only twice the diameter of the Sun. Pollux and Castor shine at +1.16 and +1.93 magnitude respectively.

Now we swing up and over to a constellation almost directly overhead — Auriga, where we find +1.93 magnitude Capella. While Capella (G6) is a class “G”-type yellow star like the Sun (G2), it has three times more mass and is just over seven times the Sun’s diameter. Next we proceed south to encounter the orange giant (K5) Aldebaran in Taurus. Aldebaran represents the bull’s eye in the star pattern known as the Hyades star cluster (shaped like a “V”). Aldebaran, 65 light years away, is a cool star which has expanded to be just over 44 times the diameter of the Sun with only 2.5 times our Sun’s mass.

Continue to swing southward in the sky until we arrive at the bottom right star representing Orion’s left foot. (Please note: Orion is facing us.) This star is +0.18 magnitude Rigel, a blue supergiant (B8) 800 light years away — the most distant of the Winter Circle stars. Rigel is 62 times the diameter of our Sun and contains 17 times more mass. We now complete the tour of the Winter Circle by swinging back to Sirius.

But wait. No, I didn’t forget about Betelgeuse. Betelgeuse is the red supergiant (M2) star that marks the top right shoulder of Orion. It shines at magnitude +0.45 and resides at a distance of 520 light years. Betelgeuse is also a very large star, measuring in at a conservative 950 solar diameters. If you replaced our Sun with Betelgeuse it would extend out to the asteroid belt between Mars and Jupiter.

As you can see by this small sampling of stars that comprise the Winter Circle, stars are quite a lot like people. They are all different, but their differences make them unique and important.

The next time you have an opportunity to observe the Winter Circle, you will have a better understanding and appreciation of the scale and diversity of our stellar neighbors in this region of the Milky Way Galaxy.

PS. Want to identify more constellations on your own? Visit Uncle Als Sky Wheels on the Internet. From this website you can download templates to assemble your own planisphere/starwheel. Instructions for assembly and use are included. I suggest you print on card stock paper. Then go outdoors on a clear night and explore the heavens.