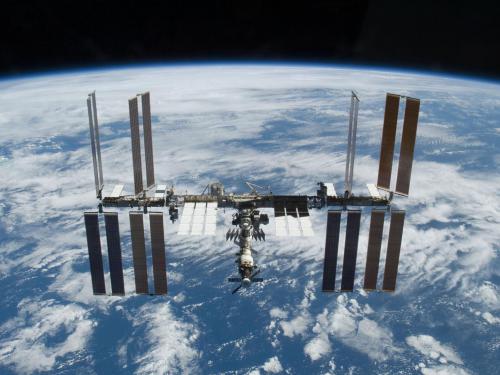 Periodically throughout the year, the International Space Station (ISS) becomes visible in the evening sky, offering up stunning opportunities to view bright nightly passes for a few weeks. The ISS orbits planet Earth once every 93 minutes at a 51.6Â° inclination to Earth's equator. This orbital period and inclination cause the ISS to change its visible position as it relates to an Earth-bound observer. As a result we have visibility periods where the ISS will appear in the morning hours before sunrise or in the evening hours after sunset. Sometimes we do not have any visible passes of the ISS as it orbits below the horizon, is in Earth's shadow, or passes during daylight hours.

The ISS has served as humanity's first continuous presence in space. The initial assembly of the ISS started in November 1998 with the first crew to reside on the Station (Expedition 1) arriving in November 2000. Since then, the ISS has been continuously occupied with human residents. The ISS orbits Earth at an average height of 200 miles. At this height, the ISS resides in the Thermosphere of Earth's atmosphere and is not vulnerable to the dense atmospheric resistance of the Troposphere (where we live) and the Stratosphere. With the lack of density in the atmosphere the ISS can comfortably achieve speeds of 17,500 mph. At speeds of that magnitude the ISS can make many orbits around Earth before having to fire altitude boosters. This also allows for ISS residents to experience micro-gravity. The ISS is subject to nearly as much gravity as we are down here on the ground. Though weight does not have any influence on the rate of gravitational descent, so residents inside the ISS fall at the same rate as the Station. This results in residents and objects inside the Station to remain suspended as the ISS falls to Earth. The ISS does not appear to fall rapidly back to Earth because traveling at rates of 17,000+ mph bring the ISS close to the escape velocity of Earth (about 25,000 mph), which is the speed that an object would have to achieve to break out of Earth's gravity and essentially leave orbit. 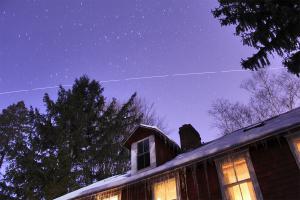 Viewing the ISS is super easy. The Station is quite bright and will appear like a super bright star moving across the sky. The Frosty Drew Observatory home page will display visible ISS passes over Northeast USA and using tools like NASA's Spot the Station you can find out exactly when and where to look for the ISS from any location. Don't accidentally confuse the ISS with passing airplanes which will blink. The ISS does not have any blinking lights visible to us down here and all light we see from the ISS is just sunlight reflecting off of the Station. So make a point to step outside on a clear evening and catch a glimpse of the International Space Station passing by.