Ceres is About to Get A Lot Bigger 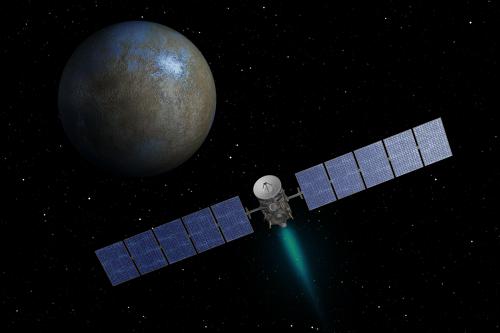 An artists impression of DAWN arriving at dwarf planet Ceres

On January 25, 2015 an awesomely mind blowing image was captured. The NASA DAWN mission, en route to dwarf planet Ceres, captured the highest resolution photo of the dwarf planet since the Hubble Space Telescope (HST) captured a view in 2004. Many of us have likely never even heard of Ceres, but that is all about to change as the little DAWN spacecraft closes in on its final destination, orbit around Ceres.

Discovered in 1801 by astronomer Giuseppe Piazzi, Ceres is the only dwarf planet that resides in the Asteroid Belt. Upon its discovery, it was classified as a terrestrial planet. Though shortly after its initial classification, similar objects were discovered in the same region as Ceres, eventually leading to the discovery of the Asteroid Belt. Consequently, Ceres was reclassified as an asteroid. Being the largest asteroid in the belt, it was designated “Asteroid 1”. Then in 2006, after the discovery that Pluto was part of the Kuiper Belt and the subsequent reclassification of Pluto to dwarf planet, Ceres was reclassified again as a dwarf planet. A designation that it maintains today.

Ceres is the closest dwarf planet to Earth, though we know so little about the actual composition and surface features of the planet. Ceres has a diameter of about 590 miles, nearly 27% the diameter of the Moon, and makes up over 25% of the total mass of the Asteroid Belt. Ceres likely has a rocky core surrounded by an icy mantle and a thin dusty crust. There is a high possibility that Ceres contains a significant amount of water ice below its surface. In 2014, the Herschel Space Observatory discovered evidence for water vapor plumes on Ceres, proving the existence of water and an atmosphere on the dwarf planet. It is estimated that 25% of Ceres may be comprised of water ice. If so, this would amount to more fresh water than exists on planet Earth!

Launched in 2007, the NASA DAWN mission has been traveling the Solar System en route to the Asteroid Belt. Upon arrival, it acquired orbit around Vesta, the second largest object in the Asteroid Belt in 2011. During DAWN's encounter with Vesta, the little spacecraft sent back 30,000 images, 18 million light measurements and a trove of scientific data that changed our view of the asteroid significantly. In September 2012, DAWN left Vesta and began its journey to Ceres. Well skip ahead 2.5 years and DAWN is closing in on the dwarf planet, with its approach phase beginning on December 29, 2014. At the time of writing, DAWN was 36,615 miles distant from Ceres, that is about 16% the distance the Moon is from Earth. DAWN is expected to arrive at Ceres and acquire orbit on March 6, 2015. 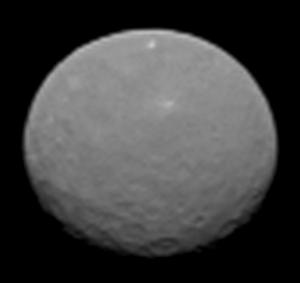 Once orbit is acquired, DAWN will capture detailed images and measure variations in reflected light from the surface, which will help reveal the planet's composition. Initial approach photos have shown us some interesting features of Ceres including potential cratering of the surface and a rather large, mysterious region that reflects a significant amount of light, appearing as a large white spot.

The DAWN mission is among the top missions happening in 2015. This is the first time a spacecraft has acquired orbit around an object, studied that object, then left to acquire orbit around another celestial body. It will also be the first spacecraft to orbit dwarf planet Ceres. The discoveries made by DAWN at Vesta were stunning at least, and we can expect nothing short of awesome in the discovery department when the rock star spacecraft arrives at Ceres.

Follow along with the adventure at the NASA DAWN mission page and keep an eye out for new photos of Ceres.