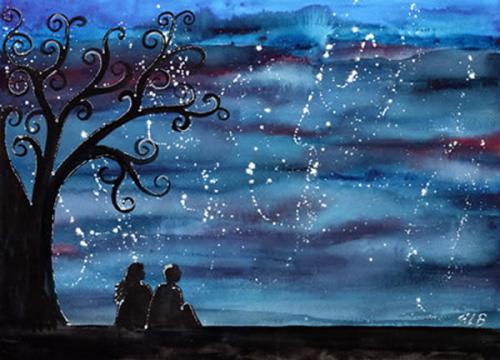 Finding a star or constellation for that matter, is allot like playing Sudoku. You start with the easier ones first and move on to the more difficult ones as your skill increases. Also like Sudoku, you start with your knowns, before you move on to your almost for certain, probably and maybes.

To give you an example on how this would work, you will first need the following: one dark sky, a red light, a monthly sky chart (downloadable from any number of different websites) and a compass if you are directionally challenged.

So grab your monthly star chart, a red light so you can read it and let’s start with something you probably know like the Big Dipper, which is located in the constellation Ursa Major. This time of year, it will be located in the Northwestern part of the sky, about 50° up from the horizon and will look like an old fashion ladle. Finding this asterism (objects that look their name) would be similar to figuring out which number to fill in on a Sudoku puzzle, when there is only one unfilled square left. By the way, just to the east and slightly higher in the sky is the Little Dipper located in Ursa Minor, but that is at least a medium level of difficulty and you’re probably not ready for that yet.

Moving on, let us turn ourselves and our star charts so we are looking northeast, about 35° above the horizon. You should see an object that looks like a “W”, this is the constellation Cassiopeia. I would still consider this a one unfilled square left, but possibly two if you looked a little higher in the sky at Cepheus. 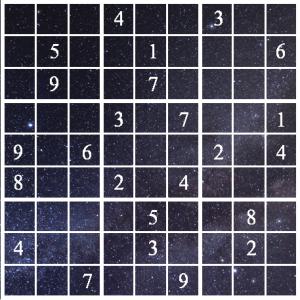 Now that we are fairly confident we know at least two constellations, congratulations by the way, let us continue due east and look about 60 -70° above the horizon. There we will find three bright stars forming a triangle (another asterism called the summer triangle). Each of these stars; Deneb, Vega and Altair, are the alpha stars or brightest stars to three separate constellations; Cygnus, Lyra and Aquila. So now we are like the Sudoku puzzle with three unfilled squares, but unlike Sudoku, we do get some hints. So let’s start with western most star Deneb and the easiest of the three to distinguish, it will be the bright star at the head of what looks like a cross lying on its side. That leaves us with just two to figure out; Vega and Altair. Vega will appear to be just east of Deneb and higher in the sky. Hanging from Vega, will be a small parallelogram (lyre, hence Lyra) somewhat faint, which is why I said you will need a dark sky. Finally, this leaves you again with just one Empty Square or star to find, Altair. Except for its brightness, and apparent location to the rest of the triangle, this star could be challenging to find. Altair is usually referred to as the beak of an eagle, with the two fainter stars above and below it as it eyes. What can I say, some constellations actually look like their name and others leave allot to your imagination.

We could continue to move across the sky in this same manner, finding stars we don’t know by the stars we do know, much like filling those empty squares in Sudoku. I imagine it is tempting though, just to grab your cell phone, download a star chart app and hold it up in the sky, but wouldn’t that be like using the answer key as you are playing Sudoku?