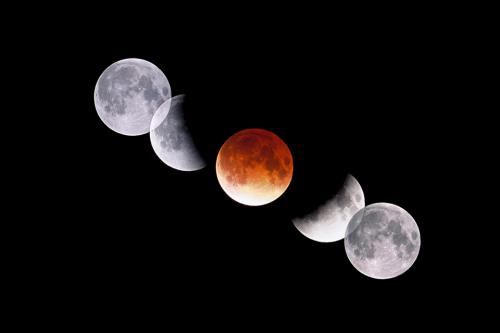 While casual stargazers with small to moderate telescopes still observe the Moon and planets, more advanced amateur astronomers today concentrate their efforts on imaging “faint fuzzies” like galaxies, clusters and nebulae. They require a dark sky to obtain their best images, so they typically avoid times when the Moon phase is large, bright and in the sky for many hours, from waxing gibbous to Full Moon and onto waning gibbous. However, I’m sure many of my associates here and across the United States will be utilizing their astrophotography skills to image a special sky event during the last week in September.

On the night of September 27, throughout all of New England and beyond, we will be treated to a total eclipse of the Harvest Moon in its entirety. The Harvest Moon is the full moon closest to the autumnal equinox, which is on September 23 at 4:21 a.m. (All times are EDT.) And the best part of it all will be that you can watch the eclipse through totality and still get to bed before midnight. So even if you are just a novice amateur astronomer, there are no excuses to miss this beautiful event.

For those of you who may be new to the world of astronomy, let me quickly review what happens during a total lunar eclipse. It occurs when the Sun, Earth and Moon are in alignment. With the Earth positioned in the middle of this celestial ballet, its shadow is projected onto the lunar surface. The duration of such an eclipse, particularly of totality, is determined by how precisely the three bodies are aligned. Follow this link to a NASA video which will illustrate this process.

The accompanying graphic shows the path of the Moon through the Earth’s shadows and the times of specific highlights/events. Note that the Moon does not pass centrally through the Earth’s dark umbral shadow during this eclipse. Still, the event does last five hours and ten seconds from start to finish, with totality lasting one hour and twelve minutes. If the Moon were to pass through the central part of the shadow, we would experience a longer eclipse and a longer duration of totality.

The eclipse technically begins at 8:12 p.m. when the Moon slides into the Earth’s light penumbral shadow. Though this initial phase is undetectable, as the Moon slides deeper into the penumbral shadow a keen-eyed observer will see a subtle shading of the lunar surface. The Moon will be moving eastward as it encounters the shadow, so the left portion of the lunar surface will slowly begin to darken. It is just prior to the Moon entering the Earth’s umbral shadow that one will notice the moonlight looks somewhat subdued. 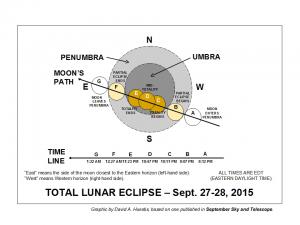 When the Moon first encounters the umbral shadow at 9:07 p.m., the partial phase of the eclipse begins. For one hour and four minutes the Moon will move deeper and deeper into the shadow, generally from left to right. Then at 10:11 p.m. the Moon will be completely immersed in the Earth’s umbral shadow and totality begins. Totality will last until 11:23 p.m. for a total duration of one hour and twelve minutes. Will the Moon completely disappear from the sky during totality? We’ll know by mid-totality at around 10:47 p.m.

The answer to that question all depends upon how much dust is in the Earth’s atmosphere at eclipse time. Usually the lunar landscape looks ashen during totality with subtle copper, orange or red tones scattered about. Sometimes the Moon will be bathed in red light. That’s because of sunlight passing through the Earth’s atmosphere and shining on the lunar surface. Think about this event from the Moon’s perspective. The Earth is eclipsing (passing in front of) the Sun, and sunlight is refracting though our atmosphere and shining onto the lunar surface.

Enhance your view with binoculars or a small telescope. The colors often change as totality progresses, so watch carefully. It is truly a beautiful sight to observe.

Totality ends at 11:23 p.m. when the Moon begins to leave the dark shadow and sunlight returns to its surface. For one hour and four minutes the partial phase will continue until the entire Moon is completely illuminated once again at 12:27 a.m. For a while the Moon’s light will still look somewhat subdued as the Moon will remain within the light penumbral shadow until 1:22 a.m. when the eclipse ends. In a dark sky you may be able to detect this shadow soon after the partial phase completes. Thereafter the remaining phase will hardly be noticeable at all as the Moon begins to return to full brightness.

Please note the sky in the vicinity of the Full Moon before the eclipse begins. The Moon will be in the constellation of Pisces, the fishes. This area of sky is not a very bright star-rich region. Very few stars will be seen near the Moon. And throughout the sky only the brightest stars of the constellations will be apparent. Only as the eclipse progresses and the sky darkens will fainter stars emerge into visibility. It will be like someone using a celestial dimmer switch, gradually increasing the brightness of the stars (or if you prefer, controlling the brightness of the Moon).

I hope the weather will cooperate on the evening of September 27-28 for stargazers of every interest level to take advantage of the magnificent circumstances which produce the beauty of a total lunar eclipse. If you miss this one for any reason, we won’t experience another total lunar eclipse here in southern New England until January 21, 2019. That’s a long wait, so make every effort to catch a few glimpses of this one to satisfy your love for the beauty nature provides.