A Morning Dance of the Planets 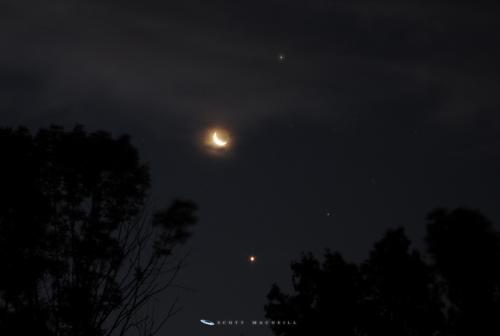 The Moon, Venus, and Jupiter in conjunction on the morning of July 7, 2015

Have you noticed the fabulous dance the planets have been putting on in the early morning sky lately? Over the past month; Mars, Venus, Jupiter, and now Mercury, have been hanging out together in the early pre-dawn sky. Though Mercury will only be sticking around for a few days, the show starring Jupiter, Venus, and Mars will just get better. Over the next month we can expect the three planets to put on conjunction after conjunction, some with less than 1º of separation between both planets.

The first of these super close conjunctions will be on Sunday morning, October 18th. Step outside between 5:30 a.m. and 6:30 a.m. and look to the East. Mars and Jupiter will appear strikingly close to each other at about 25 arc minutes separated (near ½ a degree). This is close enough to catch both in a telescope together! Add in that Venus, shining as the super bright Morning Star, will be about 6º above the pair and the view will be totally stunning!

Over the next three weeks we can expect numerous conjunctions of the three objects, some including the stunning crescent Moon. The frequency of conjunctions are almost on a three day interval with excellent viewing in between as well. Here are some choice dates to get out and watch:

October 18th:
Jupiter and Mars appear less than a half degree apart in the morning sky.

October 25th:
Venus and Jupiter in conjunction with Mars just below the pair.

October 28th:
Mars, Venus, and Jupiter will appear near equal distances apart with Venus in the center.

November 3rd:
Mars and Venus will appear less than a degree apart in the morning sky. Awesome!

November 6th:
Venus, Mars, Jupiter and the 23% crescent Moon will put on a striking dance!

November 7th:
Venus, Mars, Jupiter and the 16% crescent Moon will continue their dance with the Moon super close to Venus and Mars. So amazing!

Viewing these events will be quite easy and will not require a telescope. Though a telescope will make for a more fascinating view! Set out any time between 4:30 a.m. and pre-dawn with about 5:30 a.m. being a great sweet spot. Note that the November dates are after the switch back to EST, so set out an hour earlier. Identifying which planets you are seeing can be done using their visible brightness. Venus is by far the brightest with Jupiter being the second brightest and Mars being the dimmest and most red. Each date will bring differences in planetary position so use their brightness as a marker.

These conjunctions are all fabulous events and none should be missed. Make a habit of getting up early and catching a view of the stunning show pieces. Not to mention the photo ops here are off the wall! If you happen to catch a shot of any of these awesome conjunctions, post it on our Facebook page (http://www.facebook.com/FrostyDrewObservatory) and we'll share it on our time line. Now set your alarm, grab a toasty morning drink, and sit out under the morning starscape and welcome in the holiday season with a fabulous celestial dance, complements of the Solar System!