The Occultation of Venus 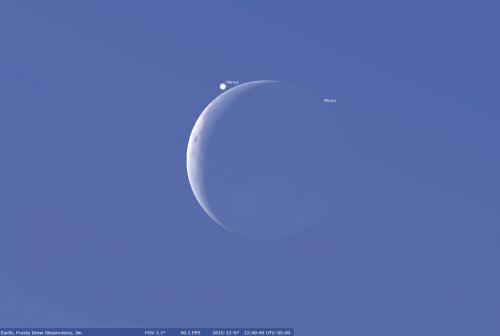 On Monday, December 7th a stunning daytime celestial event will occur when the Moon visibly overtakes Venus in the afternoon daytime sky. This event is called an occultation and it is the last planetary occultation of 2015.

Lunar occultations occur when the Moon passes in between our view of a planet or star. This happens because the Moon, which orbits Earth every 27.3 days, visibly moves across the sky at a slower rate than the stars. Stars appear to move 15° per hour from the East to the West due to Earth's axial rotation, this is called “sidereal time”. Though the Moon only moves 14.45° per hour across the sky from East to West. This slight difference will cause the Moon's position to change about .55° per hour from the West to the East as it relates to background stars and planets. Since the Moon is inclined 5° from the ecliptic (the path the Sun takes across the sky), the Moon can visibly pass in between Earth and planets depending on your viewing location. When this happens, we can observe the Moon overtake the planet at a rate of about .55° per hour. Since the Moon covers an area of sky about .5° in diameter, the occultation will last about an hour. 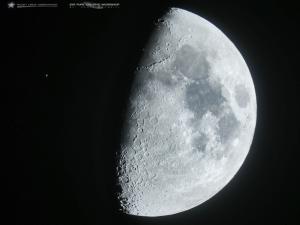 Occultations happen rather regularly, though they usually involve the Moon and a dim star. Being that Venus is the third brightest object in the sky (the Moon is the second brightest), this occultation is certainly an event to catch. To view the entire occultation in New England, you will need to find a spot with an excellent view of the Western horizon. Clear skies will also be required. If you snap a photo or video of the occultation, be sure to post it on our Facebook page and we will share it on our time line. So take a late lunch break and get out for the last occultation of 2015!

Photos and time lapse video of the occultation: