Evidence for the Existance of Planet Nine 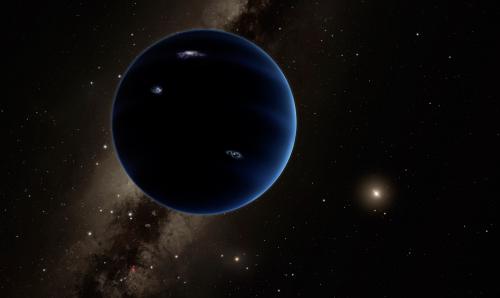 Measuring at near 10 times the mass of Earth, Planet Nine is thought to be primarily gaseous. The orbit of Planet Nine places it, on average, about 20 times further from the Sun than Neptune. This is quite substantial considering Neptune orbits the Sun at an average distance of about 2,795,000,000 miles. The orbit of Planet Nine appears to be quite elliptical with dramatic differences between its perihelion (closest to the Sun), and aphelion (furthest from the Sun). Planet Nine's orbit along this elliptical path takes between 10,000 – 20,000 years to complete. That means one year on Planet Nine is equal to over 10,000 years on planet Earth! 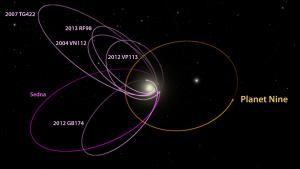 The discovery was made by Mike Brown and Konstantin Batygin at Caltech in Pasadena, CA. Similar to how Neptune was first discovered, the researchers used computer models and math to make the discovery. By measuring the orbits of objects in the Kuiper Belt, a pattern was identified in orbital direction and inclination (the tilt of a body's orbit above or below the plane of the Solar System) that were unlikely to be random. In this case, the six furthest known Kuiper Belt Objects (KBOs) all have elliptical orbits that point in the same direction, with the orbit of each object tilted 30° downward in relation to the eight Solar System planets. By placing a massive planet in an elliptical orbit opposite the orbit of these six KBOs, this alignment becomes possible and probable. Additionally, using this model, predictions were made that another set of KBOs would orbit perpendicular to the plane of the Solar System as a result of Planet Nine's influence. Over the last three years, four KBOs have been identified to do just that and their orbital positions match the simulated prediction. 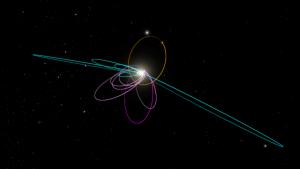 The quest for Planet Nine is just starting to unfold. Next we need physical confirmation of the existence of this distant world. We are unsure where Planet Nine may be in its alleged elliptical orbit. If it is near perihelion, larger aperture astrophotography rigs may be able to capture the planet, with the slight possibility that it may have already been photographed. Alternatively, if the object is near aphelion, only the largest telescopes in the world will be able to spot it. As such, many of these massive telescopes, including the Subaru Telescope and the 10-meter Keck Observatory, have already begun their campaign to find Planet Nine. So wipe away those big Pluto-shaped tears and gear up for what could be one of the big discoveries of the decade!