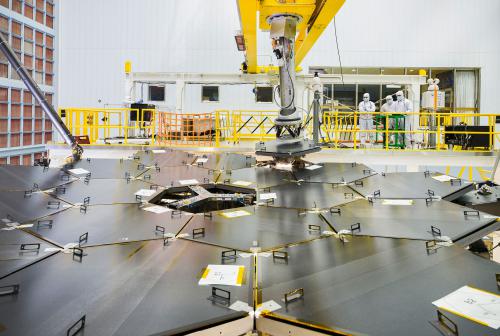 Wednesday, February 3, 2016 saw the last mirror segment of the primary mirror on the James Webb Space Telescope (JWST) installed. This marks a huge milestone on the journey to build the most powerful space telescope ever built. The telescope that will be the successor to the awesome Hubble Space Telescope (HST).

Measuring at 21.3 feet in diameter, the primary mirror of the JWST blows the doors off Hubble's 7.9 foot mirror. This large difference in size, though awesome, proposes quite a problem; notably with getting the Webb telescope into space. Hubble's primary mirror is a single piece of ultra-low expansion glass, weighing 1,825 lbs. Using that model, the primary mirror of the Webb telescope would be too large and too heavy to launch. To address this issue, JWST engineers designed a primary mirror comprised of 18 hexagonal mirror segments. Each mirror segment measures about 4.3 feet in diameter and is made from beryllium (Be), a very strong yet light metal that will hold its shape at extreme cold temperatures. The hexagonal segment design also allows the mirror to fold into a compact package, making for a practical launch. Additionally, mirror segments can be individually tuned to achieve perfect focus, with an additional actuator on the center segment allowing changes to the curvature of the primary mirror. 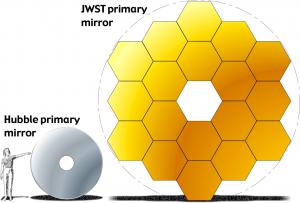 If everything proceeds as expected, the Webb telescope will see a 2018 launch date. Unlike the Hubble, which resides in a low-Earth orbit, JWST will orbit the Sun, taking up residency at the L2 Lagrange point (a spot on the opposite side of Earth than the Sun, where the gravity of Earth and the Sun stabilize the orbital period of an object orbiting the Sun to match the orbital period of Earth). The journey to L2 will take 30 days, covering a distance of 1 million miles. The orbital placement of JWST is required due to the sensitive nature of the telescope to heat. Unlike Hubble, which primarily sees in visible and ultraviolet light, the Webb will see in mostly infrared and some visible. Detecting the initial formation of stars and planets hidden inside dense nebulae requires heat from the Sun, and Earth to be blocked at all times, making these delicate infrared observations possible. This is accomplished due to a large sun shield which will deploy once in L2 and continuously block light from the Sun, Earth and the Moon. 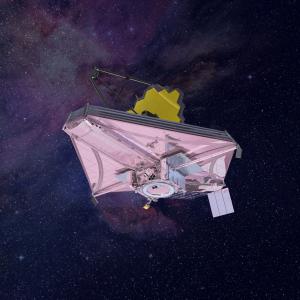 Though still a couple years out from launch, the installation of the final mirror segment of the primary mirror checks off a huge item on the waiting list of amazing things to come. The James Webb Space Telescope, with its precision optical prowess, will enable us to study the vast history of the universe, including the formation and evolution of star systems and planets that could sustain life in an Earth-like environment. Get your geek on with a glimpse of the assembled mirror and the exciting things to come at James Webb Space Telescope and come up to speed on one of the most anticipated missions of the decade.