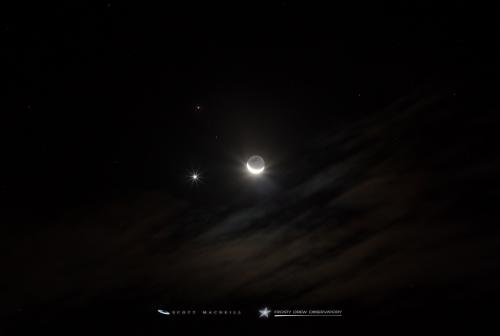 Venus, Mars, and the crescent Moon in conjunction

I love the cool nights of November. The hazy skies of late summer are gone, and amateur astronomers can begin their evening observing sessions after dinnertime, courtesy of earlier sunsets.

But just as we are gradually growing accustomed to shorter daylight hours, most of the United States will transition back to Eastern Standard Time (EST) from Daylight Saving Time (DST). This year that switch occurs at 2:00 a.m. on Sunday, November 1. Nothing in the heavens changes. We are simply setting our clocks back one hour. “Spring ahead and fall back/behind” is the expression created to help us remember when this practice is put into effect. This bi-annual ritual takes a few days to get used to. At least we can look forward to an extra hour of sleep. Don’t forget to reset all your clocks else you will be an hour early for any Sunday morning event.

The morning sky before sunrise will continue to display Venus, Jupiter and Mars. On the morning of November 2 you will find dim reddish Mars less than one degree (one Full Moon diameter) from brilliant Venus. Jupiter will be just above this duo. Each morning Mars and Venus will move farther apart. On the morning of the 7th, a beautiful waning crescent Moon will join the sky scene, providing a great opportunity to snap a few images.

Throughout the month, if you decide to visit one of the local observatories, ask any of the telescope operators to show you the two most distant planets of our solar system. Since the demotion of Pluto to dwarf planet status in 2006, those planets are Uranus and Neptune. These gas giants look like little blue-green disk through a telescope. You won’t see any detail, but you can boast of catching a glimpse of two distant worlds.

During the first two weeks of November we may experience more very bright meteors called fireballs from the Taurid (Northern and Southern) meteor showers. One expert forecasts the Earth will pass through a dense band of debris left in orbit by Comet Encke. While you can concentrate your gaze toward the constellation Taurus the Bull (find the V-shaped pattern that defines the bull’s face, or locate the Pleiades – the Seven Sisters), the Taurids can appear anywhere in the sky. So don’t forget to scan around. These fireballs are fairly slow and enter our atmosphere at approximately 17 miles per second. Taurids are yellow in color, and often explode and fragment into multiple meteors.

Another meteor shower peaks on the night of November 17-18. It is the famous Leonids, noted for a breath-taking storm level display back in 2001. Unfortunately the peak rate is down to its normal level of perhaps 10-15 green or blue shooting stars per hour. The Leonids blaze across the sky at around 44 miles per second as they hit the Earth’s atmosphere nearly head-on. The resulting display produces many fireballs, with about half of them leaving trains of dust which can persist for minutes.

The area of sky where the meteors appear to radiate from is in the Sickle (backwards question mark) asterism in Leo. A waxing crescent Moon (one day before First Quarter) will set around 10:00 p.m., so it will not interfere with observing the best part of the display from midnight to dawn.

You may remember I reported on the Moon passing in front of (occulting) Taurus’ brightest star Aldebaran back on September 4-5 around midnight. Another occultation of Aldebaran by a waning gibbous Moon will occur on November 26. Locally Aldebaran will disappear behind the left-hand side of the lunar limb at approximately 5:44 a.m., situated 15 degrees above the western horizon. At approximately 6:31 a.m. Aldebaran will reappear on the right-hand side while just 5.5 degrees above the horizon. Search out a good vantage point ahead of time from which to observe this event.

And finally, more than a million years ago a comet was nudged out of the vast Oort Cloud of comets that encompasses our solar system. This first time visitor to the inner solar system will pass closest to the Sun (perihelion) on November 15, when it will be at a distance of about 76,000,000 miles. Until that time Comet Catalina (C/2013 US10) can only be seen from the southern hemisphere. After perihelion it will emerge from the solar glare low in the early morning sky. It may reach magnitude +4.0, which means it could possibly be seen with the naked-eye from a light pollution-free location. Binoculars or a telescope will enhance the view, especially when attempting to spot the comet’s dusty tail. As Comet Catalina heads out back into deep space it will come no closer to the Earth than approximately 67,000,000 miles on January 17, 2016.

If you observe the Aldebaran occultation on the 26th and have both a good western and eastern horizon, turn 180 degrees around and see if you can spot the comet above the eastern horizon. Catalina will rise higher and higher each morning, but it will begin to fade. From December 6-8 it will be less than five degrees to the left of Venus at 5:45 a.m.

Don’t forget to visit the local observatories below to explore the heavens through the largest telescopes in Rhode Island. The telescope operators are more than happy to share their love of the sky with you.