The Original Lord of the Rings 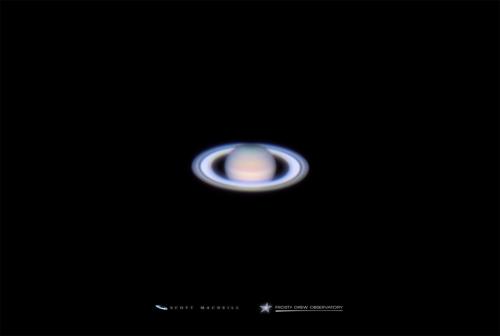 If you have any rudimentary knowledge about astronomy, anytime someone mentions the planet Saturn the image that immediately pops into your head is a planet with an extensive system of rings. This sixth planet from the Sun is magnificent to observe with any size optical instruments. Why? Saturn’s exquisite ring system is a marvelous spectacle to behold.

Richard Proctor (1837-1888), a famous English astronomer, wrote in his 1901 book, Pleasures of the Telescope, “When Saturn is in view the owner of a telescope may become a recruiting officer for astronomy by simply inviting his friends to gaze at the wonderful planet.” In another one of his books, 1901’s Other Worlds, he states, “Many telescopic views in the heavens disappoint the beginner, but that of Saturn does not. Even though the planet may not look as large as he expects to see it from what he has been told of the magnifying power employed, the untrained observer is sure to be greatly impressed by the wonderful rings, suspended around it … No previous inspection of pictures of these rings can rob them of their effect upon the eye and the mind. They are overwhelming in their inimitable singularity, and leave every spectator truly amazed.”

Nothing can entice a crowd of casual stargazers to an observatory more than the announcement that Saturn will be the focus of attention. Several hundred folks have lined up to get a glimpse of this beautiful ringed world from Ladd Observatory, especially when consecutive weeks of bad weather had forced cancellation of Tuesday open nights. 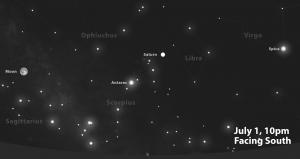 However, don’t wait until Saturn is too low in the southwestern sky at the end of September to visit one of the local observatories. Saturn is well placed for viewing now, so check the open night schedules and select a cloud-free night to enjoy this, and other, celestial wonders.

Even if you have one of the small “department store” refractors, these telescopes will provide adequate views of Saturn and his rings. All you need to know is where to find Saturn in the sky. And this task is very simple in 2015.

Saturn currently resides in the constellation of Libra, the scales. Libra is not very distinct, but it is above and to the right of Scorpius, the scorpion. (See the accompanying sky chart.) Saturn sits just above the head of the scorpion. From now until it disappears completely from view in October, Saturn will be the brightest object in this region of the sky, except when the Moon passes nearby once each month.

There is nothing that can compare with the experience of viewing and exploring this magnificent ringed-world. When children observe Saturn for the first time they often comment, “It looks like a sticker.” With so many overcast nights marring our observing sessions, I wish I could get away with posting a sticker or hanging a planetary mobile to satisfy their scientific curiosity. To prepare you for such an evening of discovery, please read the following details on what to expect to observe once the planet is focused on your eye.

Saturn was at opposition (opposite the Sun in our sky) and closest to the Earth on May 22 at approximately 11:00 p.m. EDT local time. It was still a distant 835,500,000 miles away. When this column is published at the beginning of July, the Earth will have pulled out ahead of Saturn in our respective orbits and will be 853,750,000 plus miles away. Though this difference in distance may seem large, only careful measurements would reveal the ever widening gulf between our two worlds. Regardless, the view will remain impressive.

During the summer months you will have to wait until after 9:00 p.m. for the sky to get sufficiently dark before you begin your observing session. However, Saturn will be bright enough to pick out even before the last traces of evening twilight fade away. And each night the Sun will set earlier and earlier, allowing you to start observing sooner. 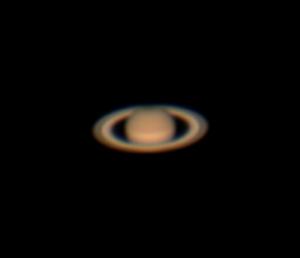 Regardless of telescope size, Saturn is indeed a pleasure to observe. The very first feature that will catch your eye is the rings. During Saturn’s almost 29½ year orbit of the Sun, we see the rings at varying inclinations. Currently they are tilted at an angle of just over 24 degrees from edge-on, affording a view of the northern “surface” of the ring system.

It is amazing that Saturn’s rings are visible at all, considering the planet’s distance from the Earth and the fact that the ring plane varies from only about 30 feet to about 300 feet (the length of a football field) thick. Although there are hundreds of ringlets, under good seeing conditions you shouldn't have any difficulty seeing the separation between the primary “A” (outer) and “B” (inner) rings, called the Cassini Division. This gap is only 2,175 miles wide. In comparison, the width of the “A” ring is 9,321 miles and the “B” ring is around 16,032 miles across. What ring features can be observed will depend upon what size telescope is used and the steadiness of the atmosphere above your viewing location.

The rings are composed of irregularly shaped dirty snowballs, ranging in size from grains of dust to the size of pebbles. There are also some “boulders” as large as several feet across. They all orbit Saturn along the planet’s equatorial plane.

While the rings will command most of your attention, don’t neglect the disk of Saturn himself. The light-colored bands and zones in Saturn’s cloud tops are much less prominent than those of Jupiter. (Very little cloud detail can be seen in small telescopes.) However, bright “spots” do develop from time to time.

In addition, both before and after opposition, one can observe the shadow of Saturn projected onto his rings. Also, as the observing angle of the Sun/Earth/Saturn increases, a keen-eyed observer should have no difficulty in detecting the shadow of the rings upon Saturn’s cloud tops. These particular viewing circumstances provide a stunning 3-D effect of the Saturnian system.

Also, though Saturn has 62 known moons, at best we can observe the eight brightest with the largest of the telescopes available in Rhode Island. Those moons are: Titan, Rhea, Iapetus, Dione, Tethys, Enceladus, Mimas and Hyperion. The first five or six of the above can be observed in a dark moonless sky using the 12-inch Brashear refractor at Ladd Observatory.

If you or your children have never observed Saturn through a telescope, then please take advantage of the opportunities provided at the local observatories. Anyone with an Internet connection can see spectacular images of the Saturnian system. However, that detached and passive exploration can never substitute for the actual experience of seeing this distant world for oneself. And if you decide to use your own telescope, please let your friends and neighbors know. You’ll have no trouble recruiting a small crowd of people to share in the excitement. And by all means encourage the neighborhood children to put down their electronic devices for a few minutes to explore the science of astronomy firsthand.