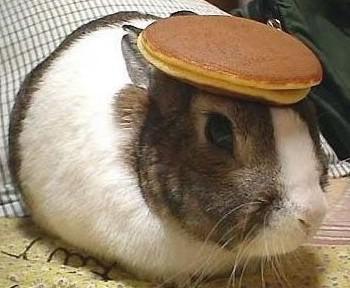 Last month we explored the reason for the seasons. The motion of the heavens is a precise clock and calendar that can be used to determine when to celebrate special events. One doesn’t have to observe the sky for too long a period of time to notice the cyclic phases of the Moon, or the changing position of the Sun relative to the horizon over the course of a year.

It should therefore not be surprising that many religions celebrate special events that are connected to the clockwork of the heavens. For instance, Christians celebrate Easter every year, but the date for the celebration changes. Since we can barely even remember birthdays and anniversaries that always occur on the same date, it’s time for me to enlighten you with the facts of how the date for Easter is determined.

Think back to Easter celebrations of years past. Was it cold or snowy and you had to bundle up? Or, were spring outfits proudly worn amidst warming sunlight and returning songbirds? Why these extremes of weather? Well, if the date for the celebration of Easter occurred on the same Sunday every year, our fickle New England weather could easily account for the differences in attire.

However, in some years Easter can occur as early as March 22 or as late as April 25. Why this range? The varying date for the observance of Easter is determined by astronomical circumstances. And in 2015 Easter is celebrated just short of midway between these two dates, on April 5.

The story began many moons ago when the Christian Church first developed. Since this holy day was determined in conjunction with Passover, Easter often fell on a weekday. However, in 352 A.D. the Council of Nicaea declared that it should always fall on a Sunday. They determined that Easter would fall on the first Sunday after the Full Moon on or next after the vernal equinox (spring—March 20 or 21). However, if the Full Moon occured on a Sunday, Easter is celebrated on the following Sunday. This scenario happened in 2001.

This year the vernal equinox was on Friday, March 20, at 6:45 p.m. EDT. The Full Moon on or after that date occurs on Saturday, April 4. Therefore, Easter is celebrated on Sunday, April 5.

People aren’t as observant of sky happenings these days as they once were long ago. Light pollution in and surrounding urban areas have blocked all but the brightest stars and planets from view. The Milky Way galaxy, our own island universe, can now be seen to best advantage only from dark rural skies.

Let’s not lose our connection to the stars from which we were born. Proper lighting can promote safety if effectively installed. Keeping stray light from polluting the night sky will allow starlight to shine down from the heavens. Then maybe folks will begin to notice and appreciate the beauty of the starry heavens once again.

Have a happy Easter, and remember to keep your eyes to the skies!

While the Full Moon of April 4 is important for fixing the date for the observance of Easter, there is even more significance to it that will catch the eyes (and telescopes) of amateur astronomers and casual stargazers alike. A total lunar eclipse occurs during the pre-dawn hours on that morning. Unfortunately here in southern New England we will see only a partial eclipse before the Moon sets below the western horizon. The partial phase begins at 6:17 a.m. EDT with the Moon barely two degrees above the horizon. It will set approximately eight minutes later. You’ll need a dead horizon with no houses or trees to obstruct your view of this eclipse locally.

To observe totality during this beautiful celestial event one would have to travel generally west of the Mississippi River. However, totality lasts only 4½ minutes, making this total lunar eclipse the shortest one of the 21st century. I for one will catch what I can from Rhode Island and wait until the night of September 27-28 later this year when we will experience a total lunar eclipse in its entirety from our own backyard.

And finally, on the night of April 22-23, you should scan the skies for members of the April Lyrids meteor shower. The Lyrids are the oldest known shooting star display, having been observed by Chinese astronomers on March 16, 687 BCE. Being an old display, the number of meteors populating the stream of particles has greatly diminished. Only 10-15 meteors per hour can be counted from dark sky locations. 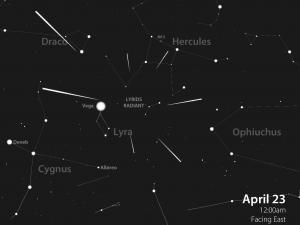 These swift and bright meteors disintegrate after hitting our atmosphere at a moderate speed of 29.8 miles per second. They often produce luminous trains of dust that can be observed for several seconds. A waxing crescent Moon will set before midnight, thereby not interfering with the midnight to dawn peak of the Lyrids

The Lyrids appear to radiate outward from an area of sky on the Lyra-Hercules border near the bright star Vega, which will be about 45 degrees (halfway between the horizon and zenith) above the eastern horizon at midnight and well placed for observing. Remember, while you can trace back the dust train left by a Lyrid meteor back to the radiant point, members of this shower can appear anywhere in the sky. I continually let my eyes roam the heavens while facing this general direction.

Clear skies for all your observing adventures.