Reason for the Season(s) 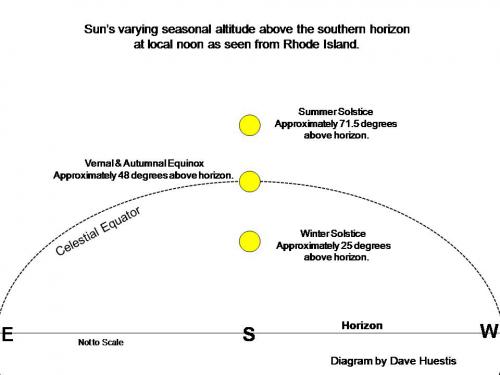 Folklore tells us that March comes in like a lion and goes out like a lamb. While March is meteorologically a spring month, here in New England and other mid-latitude locations throughout America, it is still cold and snowy when it commences and much milder and rainy at month’s end. Hence the comparison to the ferocity of a lion and the tranquility of a lamb. However, this explanation, attributed to the early American Colonists, is not globally applicable. We must turn to astronomy for a more inclusive answer.

It’s really quite simple. When March begins, the constellation Leo the lion is rising above the eastern horizon just after sunset, and at month’s end Aries the ram can be found setting below the western horizon at sunset. This sky clockwork has not appreciably changed for thousands of years. Our ancestors observed the appearance of these star patterns and ascribed significance to their seasonal arrival and departure in the sky.

Most everyone links the weather with seasonal changes. However, through my decades of public outreach and teaching astronomy, I know many folks are misinformed as to the reason for the season(s). Some individuals believe the northern hemisphere summer is hot because the Earth is closest (perihelion) to the Sun at that point in its orbit. Quite the opposite is true. Earth is at perihelion (approximately 91,000,000 miles) in early January, while farthest (aphelion) from the Sun at the beginning of July (approximately 94,000,000 miles). Even this three million mile difference has little effect on the Earth and its environment. The seasonal changes are the result of the Earth’s axial tilt as it orbits the Sun.

Have you ever noticed how high the Sun arcs across the sky during the summer, or how low it arcs during the winter? It’s an astronomical cycle that only requires one’s eyes to observe, plus a one year commitment of time. I’m sure you’ve noticed the Sun rising or setting at various locations along your horizon during the year. One month it may be rising or setting directly in front of you as you drive down a particular road, while at other times it may be either north or south of that same position. Astronomy provides the answers.

Here are some important facts to remember: The Sun does not physically move across the sky. For this discussion, the Sun essentially rotates in space at a fixed position. The Earth (and all the other bodies of the solar system) orbit about it. Because the Earth rotates from west to east on its axis, the Sun appears to rise in the east and set in the west. If you could sit high above the Earth’s north pole, our planet would rotate counterclockwise beneath you. Also, the Earth’s poles are tilted 23 1/3 degrees from the perpendicular and always point at the same fixed position in space. (During the nighttime hours we can observe the stars rotating around that point near the pole star Polaris.) In addition, there is an imaginary line in space called the celestial equator, an extension of the Earth’s equator projected onto the sky.

Therefore, when the Earth orbits the Sun, the north and south poles are alternately tilted towards or away from it. The following video will help you to understand this orbital motion.

The apparent effect in our sky is that the Sun appears to move north and south throughout the year. How high or low the Sun appears at local noon time depends entirely on one’s geographic latitude. See the accompanying diagram, created specifically for Rhode Island, illustrating the Sun’s position on the dates of the four seasons.

Since we are astronomically experiencing winter, let that be our starting point to explore the annual progression of the seasons from our northern hemisphere perspective here in Rhode Island.

When the north pole is tilted away from the Sun, the northern hemisphere experiences winter while the southern hemisphere experiences summer. On December 20th or 21st, the Sun is as low in the sky as it can get. This event is called the winter solstice. Since the pole is tilted 23⅓ degrees, a person standing on the Earth at latitude 23⅓ degrees south will see the Sun pass directly overhead at local noon. This line of latitude is called the Tropic of Capricorn, and it can be found on most Earth globes.

After the moment of winter solstice, the Sun then begins its welcome migration northward as the north pole begins tilting more towards the Sun. When it crosses the celestial equator, spring begins in the northern hemisphere. Occurring on March 20th or 21st, this event is called the vernal equinox. Equinox means equal day and night, for each of Earth’s hemispheres receives equal sunlight. A person standing on the Earth’s equator will see the Sun pass directly overhead at local noon. On this date the Sun rises due east and sets due west—an ideal time to determine what direction east/west is without using a compass.

As the Earth continues along in its orbit, the Sun moves northward until it reaches its highest position in the sky on June 20th or 21st, the summer solstice. The north pole is then tilted at its maximum toward the Sun. And since the pole remains at a fixed tilt of 23⅓ degrees, a person standing at latitude of 23⅓ degrees north on the Earth’s surface will see the Sun pass directly overhead at local noon. This line of latitude can be found on any Earth globe...it’s called the Tropic of Cancer.

After the summer solstice the Sun will begin moving southward in the sky, the result of the north pole beginning its tilt away from the Sun. On September 22nd or 23rd the Sun once again crosses the celestial equator, signaling the autumnal equinox—the beginning of fall for the northern hemisphere. For the second time in the year, day and night are of equal length.

And finally to complete the one year cycle, the Sun will continue its southern migration in our sky until December 20th or 21st, when winter begins in the northern hemisphere once again.

So now that you have a better understanding of how the Earth’s axial tilt and orbit about the Sun affects the Sun’s seasonal position in the heavens, keep your "eye to the sky" and note its north and south migration during the course of a year. Become more aware of the sky events around you that most people either don’t understand or simply take for granted.
.
Though you will not require a telescope to welcome in the spring season, there are still many astronomical delights to observe at Rhode Island’s fine observatories during any season. Seagrave Observatory in North Scituate is open to the public every clear Saturday night. Ladd Observatory in Providence is open every clear Tuesday night. The Margaret M. Jacoby Observatory at the CCRI Knight Campus in Warwick is open every clear Wednesday night. Frosty Drew Observatory in Charlestown is open every clear Friday night year-round.