A Busy Month for Astronomy Enthusiasts 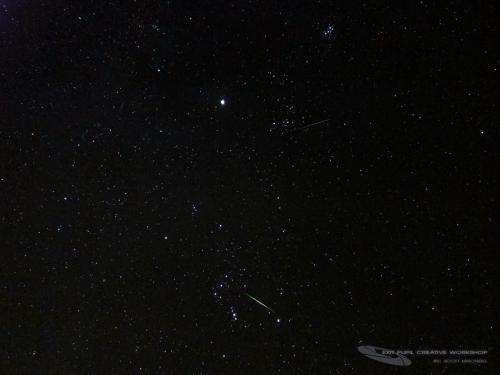 Many amateur astronomers look forward to the cooler and less muggy days of fall, which occurred back on September 23. The Sun sets earlier and earlier each night, allowing us to begin our observing sessions during the early evening hours. While this October has a little bit of everything to please even the casual stargazer, the phrase “location, location, location” is going to be a key factor in determining what will be seen.

First up on the morning of October 8 is another total lunar eclipse. You may remember back on April 15 we were clouded out during the last one. Unfortunately we are not favorably located this time around to observe the eclipse in its entirety. To do so you’d need to travel out to the West Coast. However, if you are limited to the southern New England area, you will be able to follow some of this celestial ballet as the Earth’s shadow sweeps across the lunar surface

While the beginning of the eclipse occurs in a dark sky at 4:15 a.m. (all times are EDT) with the Moon 26 degrees above the west-southwest horizon, this phase is too dim to be noticed. Only as the Moon slides deeper into the Earth’s light penumbral shadow will an observer notice a subtle darkening of the left hand portion of the lunar surface. At 5:15 a.m. the Moon will enter the dark umbral shadow and the partial phase will be underway. The Moon will then be only 16 degrees above the horizon. After this point dawn’s early light will become apparent. By the time the Moon is completely within the shadow at 6:25 a.m., it will only be about four degrees above the western horizon. The sky will be quite bright, since the Sun will rise at 6:50 a.m. Locally we will not see the end of totality, or the remainder of the eclipse. To observe this event in its entirety you’d have to travel west to at least the Rockies.

Hopefully the weather will cooperate here so we can enjoy a part of this beautiful sky show.

At the same time the Earth encounters the annual Draconid meteor shower. This minor display of shooting stars only produces ten or less yellowish slow moving meteors per hour. Though the Full Moon will most likely wash out these meteors, if you happen to see one in the northern sky emanating from the constellation of Draco then consider yourself lucky.

There is an astronomical event you will be hearing a lot about in October, which is the close encounter of Comet Siding Spring (C2013 A1) with Mars. It will come within about 82,000 miles of the red planet on October 19 at 2:28 p.m. EDT. Instruments in orbit around Mars and on the surface will be directed to observe this unique event. Some astronomers have indicated that a telescope four-inches in diameter or larger might be able to observe this encounter.

At the time of close approach Mars will be approximately 151 million miles from the Earth. It will appear as a tiny red disk in an eyepiece. Recent research indicates the comet is only just under ½ half mile across. While the comet’s coma (the surrounding dust cloud) is estimated to be about 12,000 miles across, it is very tenuous. I am extremely skeptical about one’s chances of detecting the comet from the Earth with anything but large professional telescopes. However, if you wish to give it the old college try,
Mars will be in the constellation of Ophiuchus, low in the southwestern sky after sunset.

Two days later on the morning of the 21st, we can expect to observe about 20 or so yellow and green meteors per hour during the Orionid meteor shower. The Moon will in a waning crescent phase and will not interfere with seeing this shooting star display to best advantage. These remnants of Halley’s Comet disintegrate in our atmosphere at around 41.6 miles per second. The Orionids are also noted for producing fireballs that create persistent dust trains as they blaze across the sky.

The meteors appear to radiate out of the sky just above Orion’s head (hence the name of the shower) and not far from the bright red super giant star Betelgeuse, which marks his right shoulder. While Orion is an easy star pattern to identify, at 3:30 a.m. this giant constellation can be found due south of your location and about halfway up above the horizon. Maximize your meteor count by observing between midnight and dawn.

And finally, a partial solar eclipse will be visible throughout almost all of the United States on October 23. Almost is the key word, for here in Rhode Island the eclipse begins just after sunset. In fact, we miss even a small partial by only a few miles. If you travel to Hartford, Connecticut, and you can find an absolutely dead horizon, you’ll be able to see just a tiny portion of the solar disk obscured by the Moon as the Sun sets. The farther west and northwest one travels, more of the Sun will be covered. At eclipse maximum just less than two-thirds of the Sun will be covered by the Moon. So head west if you wish to experience one of Mother Nature’s special astronomical events. Or find a live webcast on the Internet. Should you have an opportunity to observe this event firsthand, be sure to use a method that protects your eyes from injury.