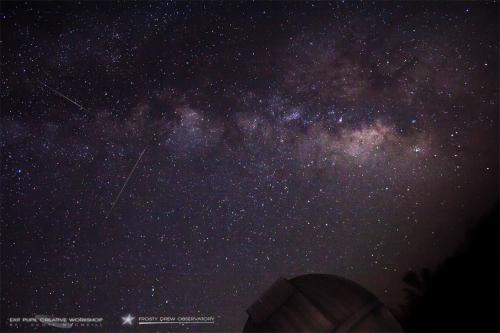 Though March winds are supposed to bring April showers, I for one am looking forward to milder temperatures and clear skies as the Sun continues its northward journey through our sky, culminating with the Summer Solstice in June. Unfortunately a welcome shower of meteors called the April Lyrids is Full Moon(ed) out on the 20th this year, but there are several other astronomical highlights I recommend you try to work into your April observing schedule.

If you’ve never seen the planet Mercury with the naked-eye, then you should begin to look for this hellish world during the second week in April. At that time it will be sufficiently above the western horizon during dusk after sunset. Mercury will be a little brighter than Betelgeuse, the star marking Orion’s right shoulder (remember, Orion is facing us). As the month progresses, Mercury will rise higher and higher into the sky, reaching its greatest altitude on the 18th. Need a guide to find it? Mercury will be ten degrees to the lower right of the Pleiades star cluster on that date. Each night thereafter it will sink lower and lower, finally disappearing back into the Sun’s glare.
Mercury exhibits phases very much like the Moon. If you have a telescope and an unobstructed view of this region of the western sky, you can follow the progression of the phases. For example, on the 14th Mercury will resemble a first quarter Moon phase

This brief appearance of Mercury is just the prelude to next month’s transit of Mercury across the disk of the Sun. Since Mercury orbits between the Earth and our star, infrequently (13-14 times per century) it passes directly in front of the Sun as seen from our perspective. The next transit occurs on May 9. I will be highlighting this incredible event in my May column. It can only be viewed with properly filtered telescopes, so caution will be the key word for the day. However, local observatories are working on transit of Mercury observing programs, so stay tuned for future updates.

On April 10 another occultation of Aldebaran, Taurus the Bull’s brightest star, will occur. As the waxing crescent Moon moves eastward in the sky, it covers the star at around 6:52 p.m. EDT along the Moon’s dark limb/edge. With the Sun still above the horizon, Aldebaran’s disappearance will not be observable. However, an hour and five minutes later Aldebaran will reappear along the Moon’s bright limb at approximately 7:57 p.m. EDT, with both objects about 34 degrees above the western horizon. Unaided eyes will suffice for the reappearance, though binoculars or a telescope will enhance the view.

Many folks were very fascinated by the alignment of planets the last few months. If you had to wake early for work, as soon as you stepped outside you couldn’t help but see an arcing line of bright star-like objects stretching across the sky. Newspapers and the television media often brought this celestial parade to the attention of their patrons. While the beautiful alignment has since ceased as the planets comprising the grouping have since moved along in their respective orbits and our viewing angle has changed, between midnight and dawn on April 25 & 26 an observer can witness another wonderful grouping of astronomical objects.

A waning gibbous Moon will slide above Mars, Saturn and Scorpius’ bright red star Antares (which means rival of Mars). Mars will be the bright orange (pumpkin colored) object, and Saturn, slightly yellowish in color, will be the left. Antares will be the red colored star below Mars. Try capturing an image. The configuration will surely fit within a single frame.

And finally, amid the hustle and bustle of this past holiday season, you may have missed the announcement of a possible new planet in our solar system. The discovery was made by Mike Brown, et al, the astronomer whose discovery of now dwarf planet Eris forced Pluto out of the planet club. Named Planet X (for unknown, not ten) or Planet Nine, its existence was postulated by the apparent influence it may have on dwarf planet Sedna and five other Kuiper Belt (realm of many comets and dwarf planets beyond Neptune’s orbit) objects. To affect the orbits and alignments of these six objects, the new planet is computed to be up to four times the size of the Earth with a mass ten times that of our planet. At perihelion (closest point to the Sun) its highly elliptical orbit would put it at a distance of 20 billion miles, while at aphelion (farthest point from the sun) it could extend out to 112 billion miles. One Planet X orbit of the Sun could take upwards of 20,000 years. Note: the numbers attributed to this proposed new world are all estimates.

It has been speculated that either the 8.3 meter Subaru Telescope or the twin 10-meter telescopes at the Keck Observatory, both atop Mauna Kea in Hawaii, could possibly detect this distant world. And should it be discovered, it may take some time to determine if it meets the revised definition for a planet: has it cleared its orbit of other objects? Back in 2006 Pluto was demoted to dwarf planet status for failing that criteria. Only time and meticulous observations will solve this problem. Mike Brown may have killed Pluto as a planet, but perhaps he will bring life to a new one.