Juno - A New Satellite of Jupiter 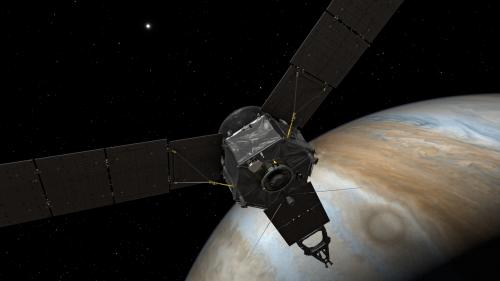 An artist rendering of Juno at Jupiter. Image: NASA/JPL-Caltech

On the night of July 4, 2016, the NASA Juno spacecraft will fire its main engine, inserting itself into a polar orbit around Jupiter. Tasked with an impressive checklist of science awesomeness, Juno will attempt to reveal the origins and evolution of the massive gas giant and in doing so will help us better understand the beginnings of the solar system.

The second spacecraft designed under NASA's New Frontiers program (New Horizons is the first), Juno launched from Cape Canaveral on August 5, 2011, embarking on its 5 year journey to Jupiter. Grabbing a quick gravity assist from Earth on October 9, 2013 gave Juno an inexpensive boost in speed. Juno will have traveled 1.7 billion miles at the time of orbital insertion in July 4th.

Juno's mission will help answer many basic questions we have about Jupiter. Does Jupiter have a solid core, like Earth? If so, how big is it? How much water exists in Jupiter's atmosphere? What do the polar regions look like? These questions along with others about Jupiter's magnetic field, atmospheric rotation, auroras, and the structure of Jupiter's interior will help us better understand the formation and evolution of Jupiter and other gas giant planets.

To accomplish the mission goals, Juno will assume an elliptical polar orbit with very close passes happening on a regular basis. These passes will take Juno through the hazardous radiation belts that make up Jupiter's magnetosphere. Having an elliptical orbit will allow Juno to avoid the most dangerous radiation belts by approaching Jupiter at the north polar region, perform a low altitude pass on a southerly heading then depart over the south polar region. The spacecraft will complete 33 of these orbits over a one year period, passing at altitudes as low as 3,100 miles over Jupiter's cloud tops every 11 days. After which, the 34th orbit will have an altitude adjustment placing Juno on a trajectory to enter Jupiter's cloud tops at 34° north latitude. Juno will not be able to withstand the density and heat of Jupiter's atmosphere and will burn up shortly after entry.

Juno is yet another excellent example of the fabulous science we are capable of accomplishing. Learning about the formation and evolution of the largest planet in the solar system will help us understand our origins. Jupiter's giant mass allowed it to retain its original composition, locking away secrets to the processes and conditions of a solar system in formation. These secrets will offer us another method to trace the solar system's history and narrow down scientific theories on what happened shortly after the formation of the Sun. Check out the Juno mission and get excited for the July 4th arrival of the 9th spacecraft to visit Jupiter. 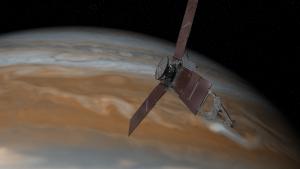 NASA TV will broadcast live coverage of the Juno Orbital Insertion at Jupiter starting at 10:30 p.m. EDT on Monday, July 4th. Tune in at: NASA TV