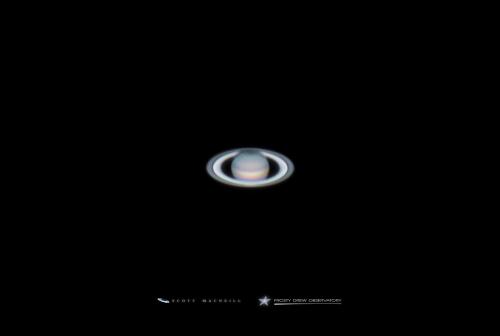 This coming December 21st, the Winter Solstice will occur, but that’s not the only awesome event happening that day. Even more exciting is a stunning conjunction of Jupiter and Saturn, called The Great Conjunction. On that evening, Jupiter will visibly approach within 6 arc minutes of Saturn. That’s 1/10 a degree! The view of this event will be quite stunning whether by just looking up, viewing with binoculars, or in a telescope. When observing the event with the unaided eye, the planets will appear so close, that they will look like a double planet in the sky. Binoculars will bring Jupiter’s four Galilean Moons into view, as well as the elongation of Saturn, due to the rings. But a view in the telescope will be amazing! In a telescope both Jupiter and Saturn will be visible in the same field of view, with Jupiter’s moons and equatorial bands being visible alongside Saturn’s rings and moons. The view will be fabulous, but scientifically, what is happening here?

Think about the orbits of Earth, Jupiter, and Saturn. Earth takes 365.25 days to orbit the Sun (that .25 is why we have an extra day every four years, what we call leap year), giving us one Earth-year. Jupiter, on the other hand, has an orbital period of 11.862 Earth-years. But Saturn’s orbital period takes the longest of these planets, at 29.457 Earth-years. These orbital periods will result in Jupiter passing Saturn, in its orbit, once every 19.8 Earth-years. This doesn’t mean that residence of Earth will get a view on that interval, because it will have to happen on the opposite side of Earth than the Sun, being visible in our night sky. If it happens on the other side of the Sun, then it will occur during our daytime hours and we’ll have to wait another 19.8 years to see it again. But there is still another variable that could make or break this event. Jupiter and Saturn both have different inclinations of orbit, which is how much their orbits are tilted from the ecliptic (the path the Sun takes across the sky, and represents the plane of the Solar System). Jupiter has a 1.3° inclination, and Saturn has an inclination of 2.485°. Inclination will directly relate to how close both planets will appear to each other when Jupiter passes Saturn in its orbit. Depending on where the conjunction occurs in the orbit of the planets, they can appear to visibly pass within 3° of each other, with the rare possibility that Jupiter could occult Saturn, which is when Jupiter will pass in front of Saturn from our view, overtaking the ringed planet. Considering that this December’s conjunction will happen at 1/10 a degree, this is a significant event.

Monday, December 21, 2020 will be the night to see it, but not the only night to catch a good view. This event does not happen instantaneously, it slowly progresses to a peak, then rescinds. So the surrounding days will give you a view that is nearly as good as the night itself. Even right now, Saturn and Jupiter are putting on a stunning show in the evening sky as Jupiter approaches Saturn. Get out there, every clear night, and take a look at the progression of this fabulous event. You will notice subtle differences, nightly, in the separation between the two. But if you want to see the peak of the conjunction, you will have a few opportunities.

Frosty Drew Observatory will host an on site event for the conjunction on December 21, 2020. Starting at 4:00 pm, we will open our telescopes towards the planets. We will also have a live view of the conjunction from a telescope that we will broadcast online for those who cannot make it out for the event. Other organizations in the state are also planning to host live online viewing, which we may collaborate with. We’ll post updates as the event nears. So put December 21, 2020 on your calendar, and catch a view of Jupiter and Saturn putting on a beautiful dance centered on the first day of winter.

Overnight Sunday – Monday, December 13-14, 2020, the annual Geminid Meteor Shower peak will occur, bringing with it an increase of up to 150 meteors per hour in regular meteor activity. The Geminid shower is, hands down, the best meteor shower of the year for several reasons. First, it brings A LOT of meteor activity! Secondly, it happens within a couple of weeks of the Winter Solstice, so there is a very long period of night to observe the shower. Third, the radiant point of the shower, which is about 10° west of the bright star Castor in the constellation Gemini (where the shower gets its name from), will rise at the end of astronomical twilight, placing the radiant point of the shower above the horizon for the entire night. The Moon plays a big role in how amazing a meteor shower peak is. If the Moon is too bright, it will outshine dimmer meteors, which make up the majority of a meteor shower peak display. This year, the New Moon will occur during the afternoon on December 14th, which will give us best case scenario regarding the Moon. All we need now is clear skies and we’ll have an amazing night! Frosty Drew Observatory will open for this event, but will not open the Observatory building or telescope as the event is best viewed under a wide open sky. Note that this shower also ramps up, so the nights surrounding the peak date will see a nice increase in meteor activity as well. So get out there! 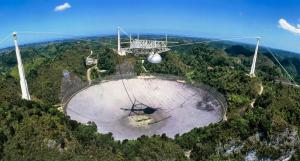 As most of you have undoubtedly heard, the fabled Arecibo Telescope at the Arecibo Observatory in Puerto Rico collapsed this past week. The collapse dealt a complete loss to the observatory telescope. The Arecibo Telescope’s construction was completed in 1963, making it the largest single aperture telescope of the time, and retaining that title until 2016, when China’s FAST telescope surpassed it. The collapse was a terrible disaster for the telescope, though it was scheduled to be dismantled anyway, due to safety issues with degrading support cables. The Arecibo Telescope was an integral component in Near Earth Asteroid (NEA) detection and study. This loss will certainly impact that area of science, which is part of our planetary defense framework. We don’t want to spend a lot of time lamenting the loss of this telescope, as these types of events often kick start a new, better replacement effort. Regardless, whether you’re a SETI freak, NEA geek, Radio Astronomer, or just a doomsayer that had your moments with the Arecibo discoveries, take a moment this weekend to raise a glass of your favorite December comfort, and have a quick requiem for the amazing telescope, while catching up on the history of this fabulous device in photos.