A Celebration of our Meade LX200 EMC Telescope 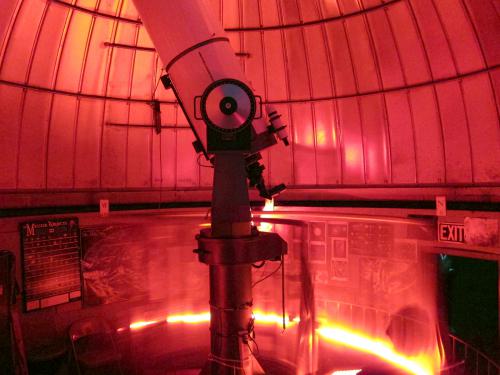 Over the past several years at Frosty Drew Observatory, we have been discussing the inevitable replacement of our aging Meade LX200 EMC 16 inch Schmidt Cassegrain Telescope, which resides inside the observatory dome. The environment in Ninigret Park, home to Frosty Drew Observatory, is quite harsh, with a lot of salt and pollen in the air, as well as dramatic temperature swings, high winds, and frequent wet conditions. Also being a public outreach telescope, that general public visitors observe through, the telescope is often thrashed by visitors that do not do their homework before visiting. Certainly not the majority of our visitors, but enough. All of this takes a toll on a telescope. We have done well in maintaining, repairing, and engineering custom fixes and upgrades to the Meade over the years, but ultimately the telescope has reached a point where it no longer functions as anything aside from a visual use device. Every year we notice a new jitter in the view, a new squeak or groan in the gears, or an increase in vibrations from the RA and DEC bearings. In early 2020, we decided that the time had come for a replacement to be decided upon.

The senior members of our Astronomy Team got together and hashed out requirements based on where we see Frosty Drew Observatory and Science Center going. On the table were numerous categories: A nice step up and expansion of our research projects, new events focused on imaging and spectroscopy, further building out our internship program, and of course offering the most inspiration view possible to our visitors, all of you that look to the sky with both curiosity, awe, and desire. 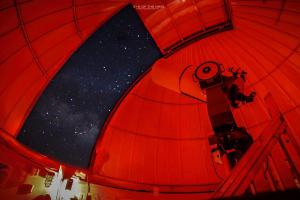 At Frosty Drew we also spec everything out into three categories: Operational replacement, operational upgrade, and pie in the sky. Operational replacement is the most budget minded category with cost being the primary decision factor. The telescope that we had in this category was a new Meade LX200 ACF 16 inch Schmidt Cassegrain Telescope – effectively a replacement. Operational upgrade is the most realistic place to be as it balances cost with need, but only allows for moderately conservative expansion. In this category we had selected an Astronomics AT20 20 inch Ritchey-Chretien Telescope. That telescope would serve as an upgrade for our research and imaging goals, but it did not fully meet the requirements for our public outreach mission, which is our primary mission. The pie in the sky category is not often the category we choose, because you know - it’s pie in the sky. In this category we select a device that not only meets all of our requirements, but also enables us unrealized levels of expansion for decades to come. Cost is not a factor in this category, and only ultimate mission success is factored. We chose a PlaneWave CDK600 24 inch Corrected Dall-Kirkham telescope for this category. PlaneWave makes the best telescopes out there today, in our opinion, as well as the opinion of most, and they are long sought after by premiere observatories. After months of discussion, we did something we rarely do, and that is choose the pie in the sky option. I won’t bore you with the details of why we don’t usually choose that category, but it is a rarity. So we put together a custom specification, and equipment list for our observatory and wrote the grant. 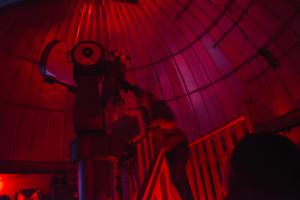 The Champlin Foundation, a Rhode Island based foundation that invests in the non-profit communities of the state, focused on ensuring long-term stability by supporting equipment needs, has been a longtime supporter, and more importantly, friend of the Frosty Drew Memorial Fund, Inc. All of our large projects have had significant support from Champlin, including the installation of the Meade LX200 EMC observatory telescope, the Sky Theatre building, the Observatory Courtyard fence, the Lunt LS100THa Hydrogen Alpha Solar Telescope, the Meade LX200 ACF 10 inch courtyard telescope, and more. The Champlin Foundation would be the make or break decision for the PlaneWave CDK600 replacement telescope. We submitted the grant in April 2020, at the height of the global pandemic, and lock-down in the Rhode Island community. For the next 7 months we held our breath while the Champlin Distribution Committee reviewed and chose what grants they would award. At Frosty Drew, the topic of the grant’s status became increasingly taboo, as the anxiety of the pending decision was crushing. It was in late November 2020 that the decision arrived in my inbox, while I was driving. I refused to read it as it was a Friday evening and I was looking forward to a calm weekend, and didn’t need the weight of a denial. But my partner doesn’t think that way, and she had to read it immediately! The first word in the correspondence was “Congratulations” and my partner freaked out. I pulled over and she read the letter to me, which stated that we were awarded the full amount that we had requested. As we sat on the shoulder of 95 South, I called Board members and members of the Astronomy Team, all of which had a unique reaction to the fabulous news. Some were in disbelief, others shocked, there was a slew of laughter and tears. It was a day we will always remember.

Since that day, it has been a long journey of chip shortages, material shortages, and several changes to the platform to accommodate the pandemic-related issues happening in the world. On Thursday, September 23, 2021, we were notified by PlaneWave, that the telescope, which was made specifically for Frosty Drew Observatory, was completed, tested, and crated. Our goal is to have the Frosty Drew Observatory PlaneWave telescope fully operational by the end of October 2021. 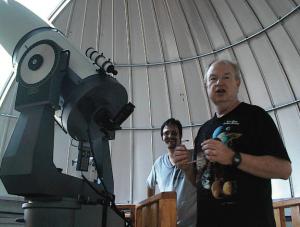 The current Frosty Drew Observatory telescope, a Meade LX200 EMC 16 inch Schmidt Cassegrain Telescope, had a similar story about its installation, which replaced our old Astro-Physics Starfire 174 and a piggy backed 12” Newtonian telescope that was not operational. The installation of the new Meade happened in 1999, and was facilitated under the leadership of then Observatory Director – Les Coleman. The addition of the 16 inch Meade enabled extensive expansion of our public outreach program, as well as the eventual addition of automated remote telescope operations and live view streaming, both onsite and offsite.

A Life List is a term that we have borrowed from the bird watching community. It represents a list of objects that one has observed. At Frosty Drew Observatory, the primary observatory telescope has a Life List of celestial objects it has observed over the course of its life – the past 21 years. The Meade’s life list is rather extensive and can be viewed here. The furthest object that the Meade has observed is a quasar in the constellation Pegasus – CTA-102. That quasar is 8.5 billion light years distant! The telescope has viewed numerous comets, asteroids, extragalactic supernovae, the entire Messier catalog, most of the NGC catalog visible to the Northern Hemisphere, and more. The most popular object that the Meade has shown is Saturn, with a close second being the Orion Nebula. Of all the telescopes I work with, the Meade is certainly the telescope that has produced the most gasps, tears, and smiles. It has served its purpose, but it is not quite finished yet. 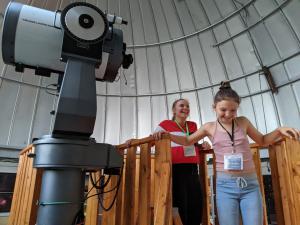 The future of the Meade LX200 EMC is not all that grim as it is still slated for use at Frosty Drew Observatory. Though the pier and fork mount will be retired from use at Frosty Drew Observatory and Science Center, the telescope itself will be retrofitted with a modern dovetail mounting rail, and attached to a modern research grade German Equatorial Mount (GEM), then placed on wheels so it can be rolled out during our Stargazing Nights events, as well as better facilitate our research and education goals. October 1, 2021 will be the last chance to observe through the Meade LX200 as it sits in the observatory dome, but you will have future opportunities to observe through the telescope again once it is retrofitted and moved back into service. During the interim, the Meade LX200 EMC telescope will be on display in either the Science Center or the Sky Theatre.