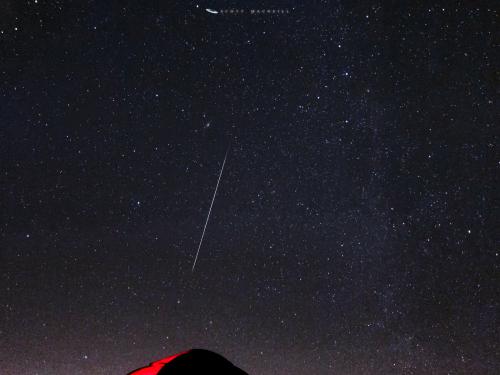 On July 17th the much anticipated Perseid Meteor Shower began. Producing many fireball meteors and an overall dazzling display, the Perseid shower is one of the most known meteor showers of the year. Though still out of the peak period, we are seeing a significant uptick in the number of bright meteors passing over the Observatory and this is the year to be out as we are in for a potentially awesome display of meteor goodness.

The Perseid shower is a result of Earth passing through a debris field left behind by comet 109P/Swift-Tuttle. Discovered in 1862 by Lewis Swift and Horace Tuttle, comet 109P was identified as the source of the Perseid shower in 1865. The comet has a 133 year orbit around the Sun, making its last visit to the inner solar system in 1992.

Meteor showers are named after the constellation that their meteors appear to radiate from. This is called the “radiant point”. The Perseid shower radiates from the constellation Perseus, visibly about half way between Perseus and Cassiopeia near the naked eye visible Perseus Double Cluster. Since Perseus is rising around sunset, the radiant point will be about 40º above the horizon at 11:00 p.m. on Wednesday, August 12th and rising higher over the course of the night, eventually passing overhead. This places the radiant point at an excellent place for viewing.

This year we are in for an awesome display of meteors! The Moon will be entering its new phase on Friday morning which means only a super thin crescent Moon will join us just before sunrise during the shower peak on the early morning of August 13th. The bright Moon usually obscures many dim meteors, so having no Moon present makes for the best viewing conditions. Additionally, the Perseid shower has a very active post peak period. At Frosty Drew, we have observed peak level conditions within three days following the actual peak date. Since the Moon will be pretty much non-existent in our skies during the days following the peak, all we need now is good weather (clouds begone!) for this to be a Perseids to remember.

Viewing the Perseid show is cake. Grab a reclining lawn chair or a blanket and lay on your back looking towards the zenith (top of the sky). Since the Perseid radiant point is the top of the constellation Perseus, which will rise overhead from the Northeast, orientate your body so your feet are towards the Northeast. Meteors will be frequent and appear to originate from the radiant point.

Frosty Drew Observatory will open all night on Wednesday, August 12th for the Perseid peak. Starting at sunset, we will offer views of Saturn's rings, and a handful of nebulae and star clusters along the visible Milky Way. Once 11:00 p.m. strikes, we will close the Observatory telescopes and make our way to the Observatory court yard where the Perseid shower will be taking off. We will stay on site until the sunrise kicks us out. If weather is favorable, we will likely be on site overnight Thursday as well. The following Friday night will bring our Stargazing Night and, if skies are clear, will line us up for another fabulous night of meteor watching. During all nights, the Milky Way will be strikingly visible with meteors shooting by. So stop in during the peak or post peak period and enjoy a fantastic night out under the stars with us.