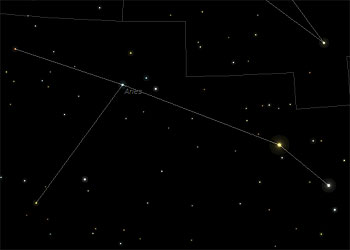 This constellation is part of the Zodiac

The King of Thessaly had two children named Phrixus and Helle who were beaten by their stepmother. The god Hermes beame angered by this and sent a ram to carry the two children to safety. Tragically, Helle lost her grip and tumbled from the ram into the narrow strip of water between Europe and Asia, now called Hellespont in her honor. Phrixus, on the other hand, arrived safely to the shores of the Black Sea where he sacrificed the ram and gave its fleece to a sleepless dragon for safe-keeping. Later, Jason and his intrepid Argonauts recovered the prized fleece and returned it to Thessaly.